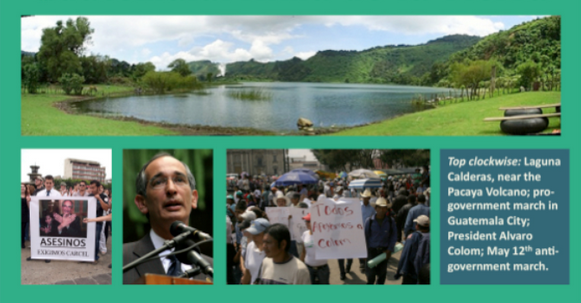 The lush greenery of Guatemala is ubiquitous, earning the moniker, “Land of Eternal Spring.” To travel the picturesque countryside of Guatemala, one would have little idea that this modest-sized country of 13 million people shouldered such a violent past. The 36-year civil war killed over 200,000 people and ended in a fragile peace in December 1996, putting an end to a series of military dictatorships and returning the country to civilian rule.

For years weak democratic institutions of Guatemala have been tested by crime, corruption, drug trafficking, and social unrest. Many promises made under the 1996 Peace Accords have yet to be fulfilled. And those in power have enjoyed an impunity caused by a weak judicial system.

All this came to a head this month when an otherwise non-descript killing took place on the streets of Guatemala City.

Days after his murder, Guatemalan Attorney Rodrigo Rosenburg could be seen in a video that was slated to be released in case of his demise. The video accuses Guatemalan President Alvaro Colom of ordering his murder.

In subsequent days, political rallies have called for Colom’s resignation and investigation; while other marchers, who consider the leftist Colom a champion for the poor, have come out in support of the embattled president.

Claudia Méndez Arriaza is an investigative reporter for El Periódico newspaper in Guatemala.

Reporter Claudia Méndez Arriaza responded to Maria Hinojosa in Spanish. Listen to their extended conversation without the English voice over.
Right-click here to download an .mp3 of this segment.