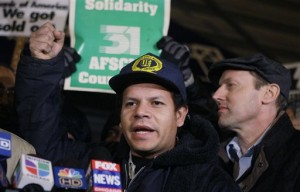 United Electrical Union Workers Local President Armando Robles, left, and U.E. Western Regional President Carl Rosen address the media about negotiations with Bank of America and Republic Windows and Doors on the fourth day of a sit-in at the companies factory Monday, Dec. 8, 2008 in Chicago. The band of 200 workers demanding severance and vacation pay have become a national symbol for the millions of laid off workers across the country after the company abruptly fired them last week when the Bank of America cut off the companies line of credit prompting them to occupy their former workplace. (AP Photo/M. Spencer Green)