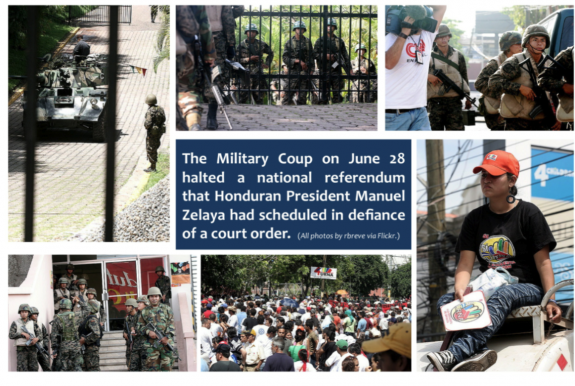 The constitutional crisis in Honduras began weeks before President Manuel Zelaya was overthrown in a military coup on Sunday, June 28. Originally a moderate conservative, Zelaya has positioned himself as a populist in the vein of Venezuela’s Hugo Chavez. On the day of his ouster, Zelaya had scheduled a referendum that would allow him to run for re-election later this year. But the country’s supreme court had already declared the referendum illegal. And when the head of the Honduran military refused Zelaya’s orders to provide security for the referendum to take place in defiance of the courts, Zelaya fired him earlier in the week.

We’re joined now by Larry Birns, Director of the Council On Hemispheric Affairs, a non-partisan policy research and monitoring group based in Washington, D.C.