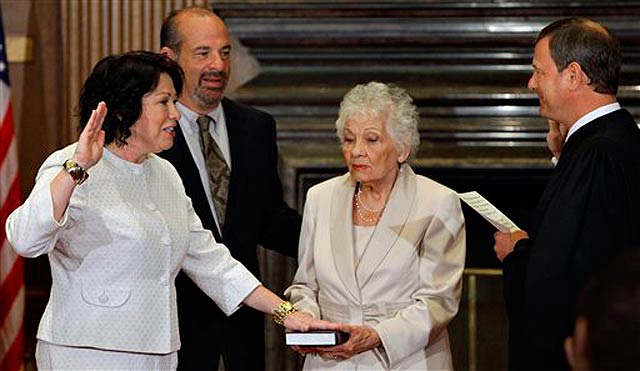 In ceremonies Saturday morning, Chief Justice of the United States John Roberts administered both the Constitutional and Judicial Oaths to Sonia Sotomayor, making her the first Latina to serve on the nation’s highest court. To see video of the Judicial oath, click here.

On Thursday, by a 68-31* vote, the United States Senate confirmed President Barak Obama’s choice of Sotomayor to serve as the 111th Associate Justice of the Supreme Court. She is the third woman to be seated on the Supreme Court.

The voting was along party lines, with the exception of nine Republicans who joined the Democratic majority in voting for Sotomayor’s confirmation.

Latino USA’s Alex Avila reports on the politics of the confirmation.

* Senator Kennedy (D-MA) was absent from the vote due to illness.