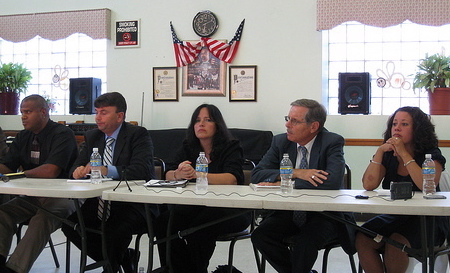 On Nov. 8, 2008, Marcelo Lucero, an Ecuadorian immigrant, was murdered in the town of Patchogue, New York. Police say that several teenagers who called themselves the “Caucasian Crew” were partaking of a little sport they called “beaner jumping” when they beat Marcelo Lucero to death.

Among other things, the incident led to the formation of the Suffolk County Hate Crimes Task Force, pictured above. What the task force quickly learned was that Lucero wasn’t the only beating victim by these and other teens.

A new report released by the Southern Poverty Law Center documents the “Climate of Fear” in Suffolk County. It goes on to name names of political leaders they identify as hate “enablers.” Mark Potok is director of the Southern Poverty Law Center’s Intelligence Project and editor of the new report. He speaks with Latino USA’s Maria Hinojosa about the fears of immigrants in Suffolk County, New York.