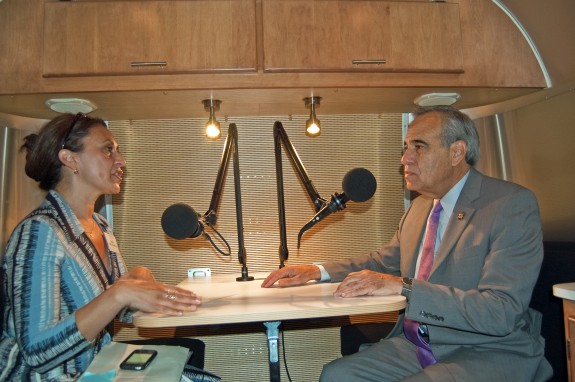 Thursday was the official launch of a new initiative through StoryCorps dedicated to collecting the stories of Latinos. It’s called StoryCorps Historias, and its aim is to record interviews throughout the country between friends and family members from the Latino community. The interviews collected will be archived at the American Folklife Center at the Library of Congress as well as in prominent Latino archives, thus forming part of an effort to record the American experience as told by the people who live it.

The StoryCorps Historias launch featured appearances by members of the Congressional Hispanic Caucus as well as the Corporation for Public Broadcasting. Many of the Caucus members were very excited about gathering Latino stories and shared some personal moments. Congresswoman Lucille Roybal-Allard of California’s 34th Congressional District (aka Los Angeles) spoke at the event and shared a story about her mother’s childhood neighborhood where the streets were unpaved and her desires to see her community’s area improve .

Congressman Jose Serrano of New York’s 16th district (aka the Bronx and parts of Harlem in New York City) emphasized the importance of the Puerto Rican community. Other Caucus members that were present include Xavier Becerra from California, Congressman Charlie Gonzalez from Texas and Senator Tom Udall from New Mexico. Other noted speakers include United Farm Workers president Arturo Rodriguez. Booths like this one will be traveling the country recording the stories of Latinos. People can come in and record conversations in these airstream trailers: