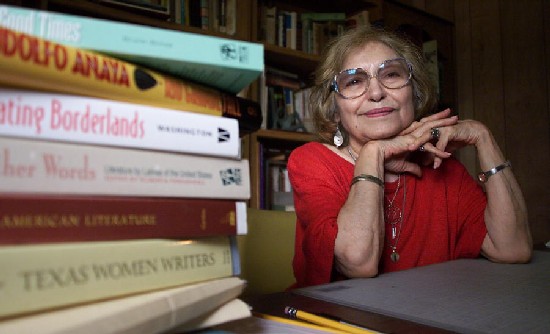 Actually, to call Angela de Hoyos a Chicana poet would be too limiting. To those who knew her, she bore many titles: co-foundress of a movement, woman of letters, publishing activist, voice of the voiceless, and many, many more. Born in Mexico, de Hoyos called San Antonio, Texas her home for the great majority of her life. She died on September 24. But her birth date is a matter of intense dispute. Some encyclopedias describe her as being born in 1940. Her official obit in the San Antonio Express News placed her birth date in 1923. Those dates aren’t even close. But what is not in dispute is her legacy and role in the Chicano Movement of the 1960s and 70s.

Largely unschooled, de Hoyos was mainly a self-educated woman. She often told the story of how she used to create childhood rhymes when she was four years old during a long convalescence from an illness. By the late 1960s, she began having some of her poetry published, winning international awards beginning with the Bronze Medal of Honor of the Centro Studii e Scambii Internazionale (CSSI) in Rome in 1966. She won awards for her writing from Argentina, India, Italy, and Germany. Her works would be translated into fifteen languages. As fate would have it, de Hoyos’ was better known in Europe than in her adopted U.S.-homeland.

When she read a letter to the editor in one of the San Antonio newspapers in 1970s, suggesting that all “Mes’kins” should go home, she fought back, writing: “Yes, amigo …! Why don’t I? Why don’t I resurrect the Pinta, the Niña and the Santa María — and you can scare up your little ‘Flor de Mayo’ —so we can all sail back to where we came from: the motherland womb.” At the height of the Chicano Movement of the 1970s, de Hoyos and her husband Moises Sandoval created M&A Editions. They would publish and mentor writers like Evangelina Vigil-Piñón, Carmen Tafolla, and Inés Hernández. Her self-published poem “To Walt Whitman” remains one of her most quoted pieces.