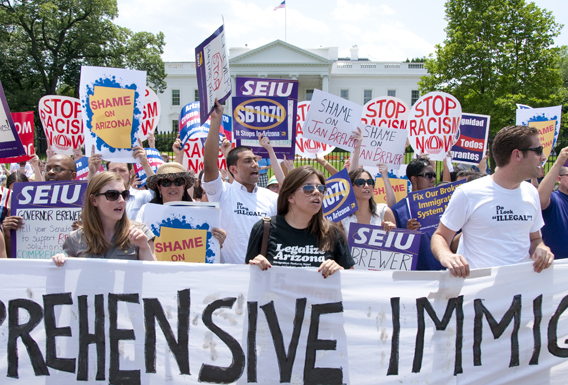 As we reported last week, the Arizona State legislature has approved, and now the Governor has signed, the nation’s most stringent law aimed as curbing undocumented immigrants from living and working in Arizona.

Governor Jan Brewer’s signed the measure into law Friday afternoon, saying she acted in response to “the crisis the federal government has refused to fix.” She also issued an executive order directing that police agencies receive training in what does or does not constitute reasonable suspicion that someone is in the country without documents. “People across the country are watching Arizona,” the Governor said.

Thomas Saenz is the general counsel for the Mexican American Legal Defense Fund (MALDEF). He’s convinced the law will not stand the scrutiny of higher courts.

The week in Arizona has seen numerous protests — both in favor of the measure, and those that were encouraging a veto. Here’s video from one protest in Phoenix, which ended in the arrest of demonstrators who chained themselves to the State Capitol.

(Video courtesy of the Cronkite News Service, a service of the Walter Cronkite School of Journalism and Mass Communication at ASU in Phoenix. Used with permission.)