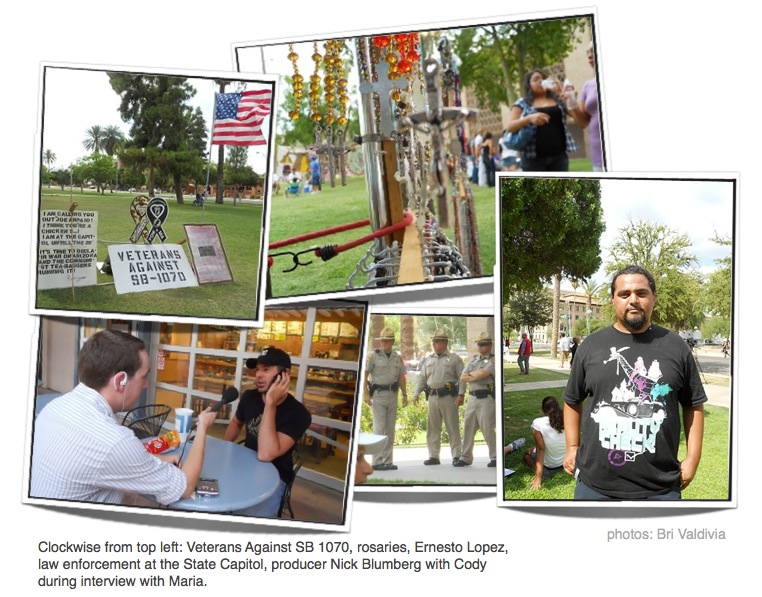 On Wednesday, June 28th, at the U.S. District Court for the District of Arizona, Federal Judge Susan Bolton issued a preliminary injunction in the matter of “United States of America v. Arizona, State of, et al.” Four key provisions of Arizona’s harsh new immigration law, SB 1070, were put on hold:

Latino USA takes you to Phoenix to hear reaction on the ground: from activists, from politicians, and from average folks.

On the day the injunction was handed down, Maria spoke with Professor Jenny Rivera of the CUNY Law School faculty, and the founder and director of the Center for Latino and Latina Rights and Equality. Here’s that conversation:

A note on how we produced this week’s program: A radio program like Latino USA is a collaborative effort. What you hear on the air is the work product of several journalists: reporters, producers, writers, editors, audio producers, web producers, photographers, and Maria, the host. Maria was not in Phoenix this week. But our Production Coordinator Nick Blumberg is, and it is his observations and conversations—his on-the-ground reporting and that of another reporter Valeria Fernandez—that informed what Maria says on the air.

In addition, and as you can see from one of the photos at the top of this page, Nick would find people for Maria to interview by phone, so that their interaction with one another could be part of this broadcast. Nick recorded the Phoenix side of the conversations. Mincho Jacob, another one of our radio producers, recorded Maria’s side of those phone calls. Then, we synchronize the two recordings and pulled sections of the composite interview to use on the air. We call this technique a “tape-sync” — and we use it often, in order to remove the phone line from the broadcast audio stream.