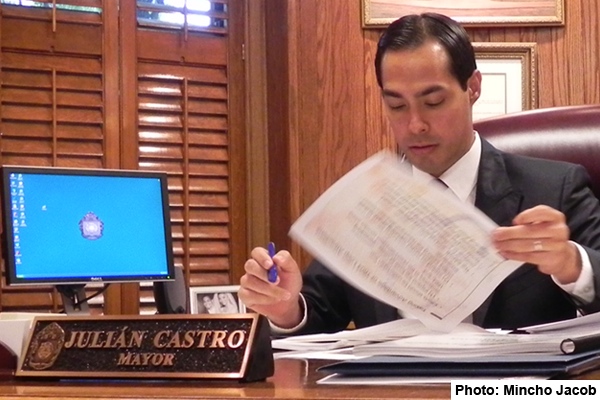 Quick—name a political family from Texas! The first one that comes to many folks’ minds is probably “Bush.” (Even though, as is often overlooked, they’re originally from Connecticut.) If you ask that question on the ground in Texas, specifically in San Antonio, the political family likely to be named is “Castro.” Joaquín Castro is a member of the Texas State Legislature. Rosie Castro was a member of the Latino third party La Raza Unida and has been a political activist for decades. Rosie’s son (and Joaquín’s twin brother) Julián Castro is the Mayor of San Antonio, the youngest in the city’s history. Julián is seen as part of a third wave of Latino politicians in the U.S. We interviewed Julián and Rosie to find out what motivates his work and how Latino politics of the past have affected him. We also spoke with Henry Flores, a Professor of Political Science at St. Mary’s University in San Antonio, about why Julian Castro is a significant figure in modern politics.

Listen to NPR’s All Things Considered this weekend for Maria’s profile of Julián Castro, whom some say represents a third-wave of Latino political leadership. He talks about his mom’s influence, and his responsibility to represent Latino interests as well as the rest of the people of San Antonio. Check your local station for broadcast times in your area.