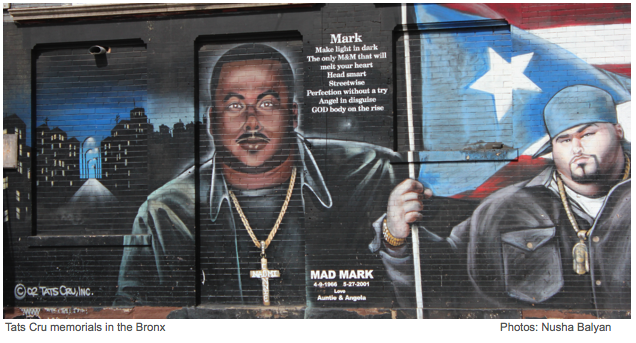 The streets of the South Bronx in the 1980s and 90s were littered with abandoned buildings, drug dealers, prostitutes and people were being killed everyday as a part of the neighborhood’s off the charts murder rate. It was out of that reality that a group of young Puerto Rican graffiti artists got their start tagging subways. Inspired by their passion for painting, their art soon evolved and they started painting colorful memorial walls throughout the neighborhood in memory of kids who had fallen victim to street violence. Maria Hinojosa first interviewed the artists of Tats Cru 17 years ago when you could find memorial walls on nearly every street corner in the neighborhood. Now nearly 20 years later, she’s gone back to interview Nicer one of the founding artists from Tats Cru to talk about the issue of gun violence and how much the problem of street violence has changed.
Produced by Yasmeen Qureshi