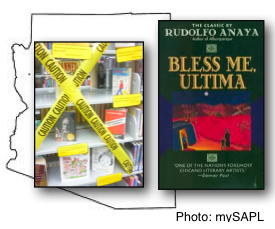 When Rudolfo Anaya’s first novel, Bless Me Ultima, was published in 1972, the idea of Chicano literature was brand new. Almost no books by Mexican Americans were available to readers. Forty years later, the schools in Arizona have taken steps to, once again, make Chicano literature harder to get. The state passed a law created to dismantle Tucson’s high school Mexican American studies program. After that, about 50 literary and history books, even including a Shakespeare play, were removed from Tucson schools and placed on a so-called “banned books” list. Anaya’s tale of a six-year-old boy growing up in rural New Mexico was among them. Maria Hinojosa sits down with Rudolfo Anaya to talk about his latest novel and the Arizona controversy.