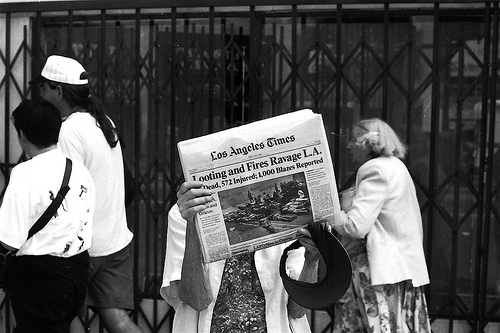 In 1992 Hector Tobar and Cheryl Devall covered the unrest after the Rodney King verdict from the Los Angeles streets. Both journalists discuss the racial and economic tensions in the city that sparked the unrest and how LA has changed since.

Cheryl Devall is a senior editor for Southern California Public Radio. She’s one of several responsible for supervising, editing and planning coverage with SCPR’s accomplished radio reporting staff. Cheryl brings to the task many years’ experience as an editor at public radio’s “Marketplace” and as a reporter – including 11 years with National Public Radio and with newspapers including the San Jose Mercury News, the Chicago Tribune and the Louisville Courier-Journal

Héctor Tobar is a Los Angeles author and journalist, whose work examines the evolving and interdependent relationship between Latin America and the United States.T obar is the author of The Tattooed Soldier, a novel set in the impoverished immigrant neighborhoods of Los Angeles in the weeks before the riots, and in Guatemala during the years of military dictatorship there. In 2006, Tobar was named one of the 100 Most Influential Hispanics in the United States by Hispanic Business magazine.