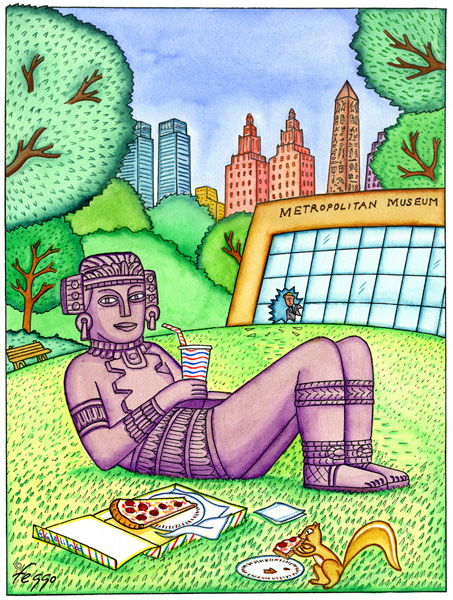 Mexican cartoonist Felipe Galindo, who goes by Feggo, has been dreaming up surreal images since he was a teenager. Today they are published in the New Yorker and Mad Magazines and all over the world. We spoke with him in his Washington Heights studio in New York as part of our new series looking at Latino professionals with unusual jobs.

Do you know a pro we should know?

We’re looking for people with uncommon jobs: tightrope walkers, road kill disposers, chewing gum testers. We’d love to hear your suggestions for people we should profile. You can write us online, in the comments below; send us an email at info@futuromediagroup.org; or call our listener line at 646-571-1228.

If you are in New York City and want to check out his show, Manhatitlán, you can visit the Mark Miller Gallery May 25th through the end of June. Here are some of Feggo’s drawings: Feggo is the nom de plume of Felipe Galindo, an award-winning Mexican artist who since 1983 has lived and worked in New York City. He creates humorous art in a variety of media, including cartoons, illustrations, fine art, and public art. He is the creator of Manhatitlan, a project which celebrates the intertwining of Mexican and American cultures in New York through drawings, animations and a book of the same title.  “No Man Is a Desert Island” is his most recently released cartoon collection book (Jorge Pinto Books, 2012).His cartoons appear in The New Yorker, The New York Times, Reader’s Digest, The Wall Street Journal, Mad, Nickelodeon, Inx, Barron’s and in British publications such as Private Eye, Oldie, The Spectator, Prospect, as well as many others worldwide.