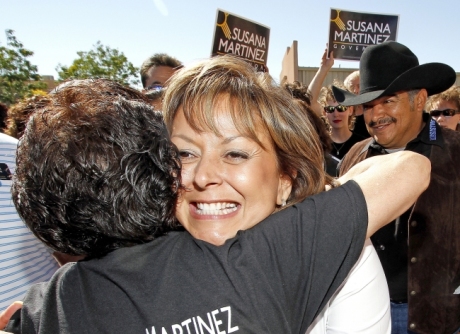 New Mexico Governor Susana Martinez has said repeatedly that she would not accept an offer from Mitt Romney if he asked her to be on the ticket with him in November.  Still, she could influence the GOP to moderate their immigration policies.  Sarah Gustavus has this profile of a rising political star, part of new generation of Latino leaders.

Sarah Gustavus reports on topics like government, immigration and poverty for public radio and television, most recently as a reporter and host at KUNM in Albuquerque. Her work has aired nationally on All Things Considered, Weekend America, Making Contact, and Tell Me More. She grew up on a cattle ranch in Texas and spent several years developing her broadcasting skills in Seattle. She is currently studying for a master’s in media at City University in London, where her research focuses on news coverage of immigration.