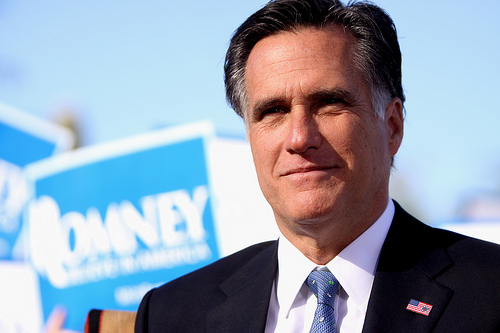 It looks like Mitt Romney is going to announce his vice presidential running mate well before the Republican convention gets underway in Tampa at the end of August. Many people speculate that Romney will choose a Latino. The question is: Who would it be and will it make a difference to Latino voters?

Romney is a tough sell to most Latinos. During the primaries, the GOP candidates seemed to be competing to out-anti-illegal-immigrant each other. Romney came on pretty strong in his support for strict enforcement of immigration laws, even urging undocumented immigrants to “self deport” themselves. But in the general election he’s hoping Latinos will forget all of that and focus on the economy. Fat chance.

What Romney fails to accept is that while Latinos are as concerned with unemployment and the recession as anyone else, immigration is still a huge issue for them. Romney’s standing with Latinos became even more problematic after President Obama announced a new policy that will help undocumented college kids stay in the country legally, a move incredibly well received by the Latino community.

The name most often mentioned as a Latino VP pick is Marco Rubio. The young Cuban-American senator from Florida is popular among Tea Partiers and conservatives. Rubio is probably the best known Republican Latino politician out there right now. He’s practically a household name and his nomination would lock up the Cuban-American vote for Romney. But Romney already has their support, so why work hard on a sure thing? Cuban-Americans aren’t that concerned with immigration policy, as their path to citizenship is totally different from that of other Latinos. Rubio is a strident opponent of unauthorized immigration, which is a big turn off for most Latinos other than Cubans. It’s doubtful that nominating Rubio would change many people’s vote. Political commentators are starting to agree with me, even conservative ones like Fox News’ Sean Hannity.

Another possibility is Puerto Rico Governor Luis Fortuño. He was an early supporter of Romney during the primaries. Fortuño has strong conservative economic credentials and is an outspoken proponent of having Puerto Rico join the Union as the 51st state.

It’s doubtful that picking Fortuño would be enough of an incentive for the majority of Puerto Ricans to vote Republican. While they may be glad that a Boricua is on the ballot, many still disagree with conservative Republican policies. Also, Fortuño’s pro-statehood stance isn’t very popular among Puerto Ricans on or off the island. Four times in recent years Puerto Ricans have voted to maintain the status quo and not join the Union.

New Mexico governor Susana Martinez is another possible candidate for VPOTUS. She’s not as well known as Rubio or Fortuño, but the benefit of Martinez is that she’s a double threat: a woman and a Latina. The thinking goes that she could attract both female and Latino voters because of her ancestry and gender.

The problem with Martinez is that she is a controversial figure. She admitted that her grandparents came to New Mexico as undocumented workers, which was not popular among anti-illegal immigration conservatives. She tried to win them over by passing a law making it nearly impossible for undocumented workers to obtain driver’s licenses in her state, but that wasn’t popular with Latinos. Martinez, unlike Rubio and Fortuño, has experience with the plight of the undocumented in her own family and yet is actively working to make things harder on recent immigrants.  Would Romney risk alienating his conservative base for a nominee that many Latinos see as a traitor?

So while it’s conceivable that Romney will pick a Latino as his running mate,  it probably won’t happen simply because it won’t make a big enough difference for the Republican ticket.  Yes, it’s true that the Latino vote could be a deciding factor in a number of key states and the GOP needs to find a way to capture that vote. But will Latinos who support the rights of undocumented workers—and in many instances have undocumented family members—vote for a candidate just because the person running with him has a Spanish last name?  Probably not.  If Republicans really want to win over Latino voters they need to do more than rely on symbolism that the GOP is their amigo.