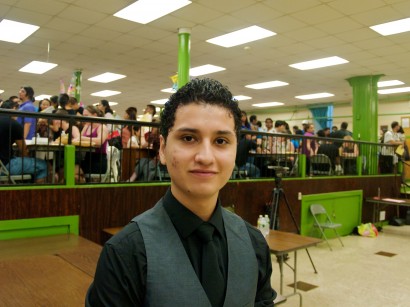 The basement of St. Mary’s Church on Manhattan’s Lower East Side resembled a makeshift Department of Motor Vehicles office Wednesday, as undocumented immigrant youth waited in long lines to consult with lawyers about their deferred action applications.

In fact, the DMV is where many of the applicants planned to go once their applications are approved, a driver’s license being one of the perks of finally having legal status.

On the first day that U.S. Immigration and Citizenship Services accepted applications for deferred action, 22 year old undocumented immigrant Eduardo Resendiz was among those seeking advice.  He told Fi2W that while he’s happy with the opportunities the program will give him, especially the right to work legally, he’s not “completely satisfied.”

Resendiz, who immigrated to the U.S. from Mexico, said he will continue to advocate for a solution not just for students but for entire undocumented families.

“Like many undocumented immigrants, I consider this my homeland,” he said, “and I believe only the DREAM Actwill give us the sense that we are truly Americans.

Resendiz pointed out that even if his application is accepted, the rest of his family—living here since 2005—will remain undocumented including his 14-year-old sister and his parents who, as he put it, “continue to live in the shadows”

Sara Martinez, who came to the U.S. from Mexico as a baby, is planning to apply for deferred action but hasn’t managed to get documents together that prove she has been living here for five consecutive years. She has been organizing workshops across New York city as part of theNew York State Youth Leadership Council and is busy strategizing with other activists ways to keep the momentum going.

“Deferred action is not the same as the DREAM Act. We have to educate our communities about the risk involved in signing that application,” she said. Martinez sees deferred action as just a step toward passing the federal DREAM Act and also a New York state DREAM Act that would make undocumented students eligible for student loans.

Organized by the New York Immigration Coalition, the legal clinic at St. Mary’s had dozens of volunteer attorneys sitting in long rows meeting with applicants and going through their forms and documents.

Jacki Esposito, the director of immigration advocacy with the NYIC, is one of the organizers of the clinics. Although currently she is concentrating on helping people through the deferred action process, she thinks the next step is clear.

Deferred action, said Esposito, is a major victory that “builds momentum and mobilizes immigrant youth in a new way.” But it’s bittersweet: “Many DREAMer’s parents still live in fear.”

According to Esposito, the next phase will be to activate all the new members of the DREAM Act movement, youth who’ve become politically active for the first time through this process and feel empowered to take the change even further.

“It’s no question that the president’s announcement was a response to two years of advocacy,” said Esposito. “They know how hard they worked,” she said referring to the DREAMers, “and they won.”

New York wasn’t the only place where legal clinics were drawing crowds. A deferred action workshop in Chicago expected to help 1,500 undocumented youth with their applications ended up drawing an estimated crowd of 50,000. Many were turned away.

US Senator Dick Durbin, one of the original authors of the DREAM Act, was one of the hosts of the event. When Fi2W asked for his opinion on what should happen next, his staff pointed us to a speech he gave last month to the Center for American Progress.

Durbin believes that deferred action, far from being a permanent solution, is an important step toward, as he puts it, “sensible immigration reform.” He said deferred action “will forever change the debate.” His theory is that as the American public interacts with many of the beneficiaries of the program, they will see the contributions they’re making and be open to greater reform.

Feet in 2 Worlds is supported by the New York Community Trust and the John S. and James L. Knight Foundation with additional support from the Ralph E. Odgen Foundation and the Sirus Fund.