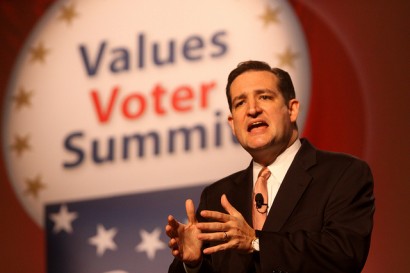 It was a big upset: Republican rock stars from Governor Rick Perry to Mike Huckabee endorsed Dewhurst. Cruz, however, was backed by some of the state’s more hardcore tea partiers, (I know, more hardcore than Perry?).  Much like fellow Cubano Marco Rubio, Cruz’s strong opposition to anything smelling of political moderation has led to endorsements from the likes of Sarah Palin and Glenn Beck. Though I am a liberal Democrat and opposed to everything he stands for, I can’t help feel a certain kinship to Cruz, a fellow Cuban-Texan.

Let me explain. Though some of the facts about his family history have been questioned, his “When we came from Cuba” stories are similar to my own. Like Cruz’s family, my grandparents were strong supporters of Castro during the revolution against dictator Fulgencio Batista. Cruz says his dad Rafael, “was a guerilla, throwing Molotov cocktails and blowing up buildings.” Batista later tortured him. My uncle Pedgie was a guerilla fighter under Che Guevara and was murdered in cold blood by Batista’s thugs. Unlike my family, Cruz’s father fled before the triumph of the revolution in 1959. Lucky him.

Rafael Cruz came to Austin in 1957 with only $100 sewn in his underwear. The story reminds me of my grandfather leaving Cuba in 1969 with his medical diploma cut into small pieces and sewn in his boxer shorts. Except for a brief stint in Canada where Ted was born, the Cruzes settled in Texas rather than the Cuban exile mecca of South Florida.

The Lone Star State is also where my grandparents landed. Despite their first house being five blocks away from the Ku Klux Klan’s east Texas headquarters, they felt welcome. My grandfather described how he and his Cuban friends were the only Latinos in the Houston suburb of Pasadena where they settled.

Why would hardcore Texas conservatives welcome immigrant Latinos like my family and the Cruzes?

The answer is similar ideologies. Our families were both cartoonishly anti-Communist. Their disillusionment with Castro led them to react against anything  even remotely progressive.

During the revolution, Castro promised to establish a democratic republic with free elections modeled on the American system. That sounded pretty good to the 98 percent of Cubans that supported him, including my family and probably the Cruz family too. Pretty quickly after his victory it became apparent that he was allying himself with the Soviet Union and was setting up a Communist dictatorship. For a lot of Cubans not only was this an ideological betrayal but a personal one. My grandmother fell into a deep depression when her friend General Huber Matos was imprisoned and he revealed to her that Castro was a Communist. It was like a break-up for a lot of them, and often just like in a break-up you hate the “other woman.” For many Cubans Communism was the other woman.

I suspect that in the Cruz household, as in my own house growing up, the words “Democrat” and “Communist” were synonymous. My grandmother had a picture of Ronald Reagan next to a picture of Jesus by the family Bible. True story.

Like a lot of old-school Cubans, they blamed the Democratic Party for the failures of the Bay of Pigs invasion which led to my grandfather’s imprisonment by Castro for his involvement. My grandparents also thought that Democrats wanted to have too much of a hand in their lives.

My abuelo lived through 3 dictatorships in his lifetime (Machado, Batista, and Castro) only to come to the U.S. in time for Watergate. He simply didn’t trust governments and wanted to have as little interaction with them as possible. He always told me that all politicians, even guys like Reagan, were all “hijo de puta mentirosos (son of a bitch liars).” In ultra-conservative Texas circles, these ideas are as ingrained in the culture as bar-b-que and cowboys.

Today I am considered a heretic in my “Cu-Tex” family. My cousins mostly still think the way we were brought up to think. I simply cannot discuss politics with most of my older relatives. They tell me they’re glad my grandparents didn’t live to see what I’ve become.

When I look at Ted Cruz, I reflect on how easily I could have been him ideologically. If I hadn’t drifted to the left in my teenage years, perhaps like Cruz, I too would want to abolish the commerce, education, energy, and TSA departments as well as the IRS. Maybe I would also say things like, “I’ll throw my body in front of a train to stop anything short of its complete and total repeal” in reference to “Obamacare.”

Maybe if I had read more Ayn Rand?

There but for the grace of God go I, my friends.