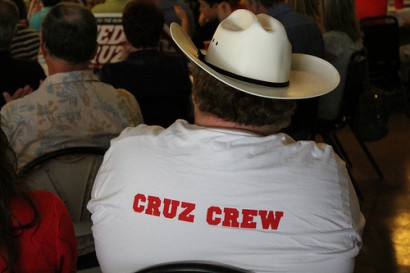 The Republicans kicked off their national convention in Tampa on Tuesday with a program starring a line-up of GOP all-stars. They also carted out many of their Latino headliners. Nevada Governor Brian Sandoval and First Lady of Puerto Rico Luce Fortuño had their chance to speak before what looked on TV to be a blindingly white audience. But the real Latino standout was Texas U.S. Senate candidate Ted Cruz.

The Texas delegates, dressed in bar-b-que outfits- Texas flag shirts and cowboy hats – cheered him on. The audience repeatedly jumped to their feet to applaud Cruz during his 12-minute speech. As I watched it I kept thinking, “Why do they keep applauding? He’s not saying anything and what he does say makes no sense!”

I’ve written before about the many things that Cruz, a fellow Cuban-Texan from a conservative family, and I have in common. Our backgrounds aside, I can honestly say that Cruz and I agree on almost nothing. Cruz is a tea party favorite for his extreme rhetoric that includes abolishing the IRS and the education, commerce, and energy departments. But he didn’t come right out and say all of that crazy stuff in his speech. That would have alienated the less extreme members of the GOP. Now is a time to watch what you say.

Speakers at the convention kept repeating the same information:  “Obama put us 16 trillion dollars in debt, 23 million people unemployed,” and keywords like “We Built It”, “freedom, liberty, free market, grass roots,” and “We the People”. Cruz hit all of the talking points and quoted famous lines like, “Mr. Gorbachev, tear down that wall!” and Martin Luther King Jr’s line that men should be judged, “not by the color of their skin but by the content of their character.” It’s the equivalent of a band that only plays their greatest hits, only Cruz is playing other people’s songs. Of course the delegates cheered: Reagan’s Berlin Wall quote is the Freebird of Republican rhetoric.

Cruz even spoke in Spanish. He told the story of his father’s immigration to the United States after being imprisoned under the Batista regime in Cuba. He said of his father, “No tenia nada, pero tenia Corazon (he had nothing, but he had heart)” in the thickest gringo accent you ever heard to limited applause. This was a calculated move to prove his Latino cred, and what good is a token Latino if he isn’t “Latino enough”?

Through the haze of tired rhetoric and familiar quotes, he said something that caught my attention, “Unfortunately, President Obama’s campaign is trying to divide America. To separate us into groups. Telling seniors that Medicare will be taken away. Telling Hispanics that we’re not welcome here.”

Let’s put aside for a second that the Republican party platform calls for overhauling Medicare so that seniors would have to buy private insurance with some government assistance. But Obama is telling Hispanics that we aren’t welcome?

Wasn’t it vice presidential nominee Paul Ryan who described arresting and deporting undocumented workers with the fishing term “catch and release”? Cruz supports Ryan even though he is in favor of throwing out so-called “anchor babies”? Cruz repeatedly talked about how much he loves the Constitution, but I guess he forgot that the 14th Amendment provides equal protection under the law to all citizens. Since “anchor babies” are born here, they too are citizens, Ted.

Or perhaps it slipped his mind that he opposes any form of amnesty, including the DREAM Act or the president’s immigration reprieve. Cruz also favors the building of a border wall as well as the terrifying phrase “boots on the ground” along the U.S.-Mexico border.

Mitt Romney is hoping that during the fall campaign Latinos will forget all of the anti-immigration rhetoric he used during the primaries and concentrate on how badly the economy has hurt Latinos. Cruz touched on this when he said that there were 2.3 million Latino small business owners being hurt because Obama had “declared war on small business”. He didn’t go into how exactly the president was doing this. Latinos count the economy as their top concern, which isn’t to say that immigration isn’t a close second for most of them.

Latinos won’t soon forget that Cruz, a son of immigrants that grew up in a state with a huge Latino population, has sided with a party whose platform opposes their very presence in this country. How can you trust a man who turns his back on his own people? Cruz repeatedly talks about how his father achieved the American dream by coming to the U.S. and going to school in order to make something of himself. Why then does he oppose today’s Latino youth from doing the same?