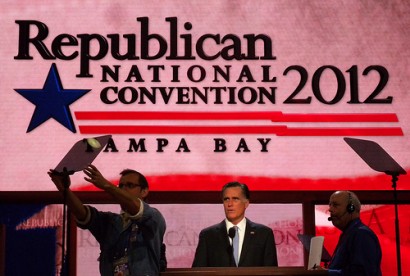 Republicans say they are aiming for 38 percent of the Latino vote in the presidential election. Mitt Romney is currently polling below 30 percent among Latinos. What can the GOP do to improve these numbers?

We called up Valeria Fernandez, a freelance journalist and filmmaker based in Phoenix, and Pilar Marrero, senior political writer for La Opinión to give us some analysis from the Republican National Convention in Tampa, Florida.

Going into the convention there was a lot of buzz about the strong anti-immigration language in the party platform, but according to Marrero, when she arrived in Tampa at the start of this week, the platform was nowhere to be found. What was leaked was so badly received that the full text was not released.

Marrero says the Romney campaign is trying to step back from the message of “self deportation” that it offered in the primaries. Romney is now talking about a proposal to add a temporary workers’ program, visas for families of green card holders and adjustments for undocumented immigrants who have served in the military. Marrero adds that Romney wants to position himself as having a more humane approach to immigration, but these measures aren’t really being advertised to non-Latino voters.

Fernandez has been seeking out Florida Latino Republicans. A major difference she has found between them and Latino Republicans in her home state of Arizona is that the Floridians largely support the DREAM Act and other attempts at reform while their counterparts in Arizona oppose anything they see as “amnesty” for undocumented immigrants and are largely behind anti-immigrant legislation like SB1070. But she says, the Floridians are distrustful of President Obama after he failed to fulfill his promise of comprehensive immigration reform, and believe Romney will be more moderate on immigration after he’s elected.

Polls show that the economy is the top concern for Latino voters. But Marrero says 68 percent of Latinos blame former President George Bush for the poor economy, and have not heard Romney’s economic message. One reason might be that Romney’s outreach to Latino voters is heavily concentrated in the battleground state of Florida with comparatively little activity elsewhere.

With Texas US Senate candidate Ted Cruz, Florida Congressman Marco Rubio and Puerto Rico Governor Luis Fortuño speaking during the convention, many have observed that Republicans are pushing hard to represent the Latino side of their party. But Marrero thinks those three will have a hard time connecting with the majority of American Latinos who are of Mexican origin. The key, she says, is the tone the GOP uses in its outreach to Latinos. Former Florida Governor Jeb Bush, she says, argued this before the convention: “We can’t tell people to join our cause if they don’t feel welcome,” she quoted Bush as saying.