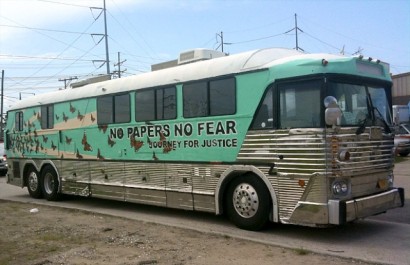 CHARLOTTE, North Carolina – Maricruz Ramirez never thought she would cross the country telling the world that she is undocumented, but when she was invited to join the UndocuBus with 30 others, she didn’t blink.

“I wanted to do this for my children,” she said. “I want a better future for them”.

Ramirez arrived in Charlotte a few days before the National Democratic Convention (DNC) where her group, the self-identified “undocumented delegation,” will engage in protests calling for immigration reform.

Their journey was intended to highlight the situation faced by undocumented immigrants across the country as they get behind the wheel to drive and risk being pulled over by the police, asked for documents and turned over to U.S. immigration agents.

The group has denounced the Obama administration for the record number of deportations in recent years, often targeting undocumented workers without criminal records.

They are especially critical of the administration’s push for agreements known as 287(g), used to deputize local police to perform the duties of immigration agents during patrols, and of Secure Communities, a related program that allows local police to check a person’s immigration status on a federal database.

“We want these programs to stop,” said Miguel Guerra, another one of the riders who began the trip in Phoenix, Arizona. Guerra, the father of three children was arrested in an act of civil disobedience in Phoenix before the journey began, but was later released.

The UndocuBus left Arizona on July 29th to mark the 2-year-anniversary of the state’s SB 1070. In it’s June 25th ruling the U.S. Supreme Court struck down three parts of SB 1070, allowing one portion to stand.  That section makes it mandatory for police in Arizona to inquire about a person’s immigration status when the police have reasonable suspicion that the person is in the country illegally. SB 1070 has inspired similar laws in other states including Georgia and Alabama, where the bus made stops en route to Charlotte.

It’s been a “liberating” experience for Ramirez, after a journey that took her through 10 different states and 16 cities where she heard stories and saw the tears of other women enduring her same struggle.

“We’ve helped many others to stand up and not be afraid,” said Ramirez.

She believes the first step to bringing about change for undocumented immigrants is for immigrants to step out of the shadows and tell their stories.

“We don’t come here to live for free. We contribute. We pay taxes,” she said.

Upon arriving in Charlotte on Saturday the UndocuBus delegation went to Central Siloe Church where they heard the story of Isaide Serrano. The young mother awaits an immigration judge’s decision on whether she’ll be allowed to stay in the country.

Serrano is now seven months pregnant and has five other children who were born in the U.S. She was pulled over by a police officer while driving back from the grocery store two years ago, for having her high beams on. When the officer realized that she didn’t have a valid driver’s license he took her into custody.

That encounter led her to a county jail that had a 287(g) program in place where Immigration and Customs Enforcement (ICE) put a hold on her and began deportation proceedings.

“I’m pleading not to be separated from my children,” said Serrano. “They have all their lives here”.

José Malgandi, an undocumented immigrant from El Salvador also rode in the bus. He doesn’t trust what Republicans or Democrats would do to address the issue of immigration.

At Republican National Convention the party released its platform that calls for the creation of,  ”humane procedures to encourage illegal aliens to return home voluntarily, while enforcing the law against those who overstay their visas.”  The GOP platform also expresses support for states that pass their own immigration laws like Arizona.

Malgandi said Republicans have used undocumented immigrants as a scapegoat, while the Obama administration hasn’t kept the promise of approving some form of immigration reform, focusing instead on deportations.

“We are going to demand to him (Obama) to not put immigration in an irrelevant place on the agenda,” he said.

For immigrants like Ramirez, the administration’s recent deferred action policy that would benefit children like hers who were brought into the country illegally, is not enough.

“What Obama offered is not a solution,” she said.  She added she hopes that if re-elected, the president will support legislation like the DREAM Act, that would allow undocumented children that were raised in the United States to legalize their status.

Valeria Fernández is an independent journalist in Phoenix, Arizona. She worked for La Voz newspaper for the last six years covering the immigration beat and she is a guest contributor on Race Wire. Valeria was born and raised in Montevideo, Uruguay, and moved to the United States in 1999.