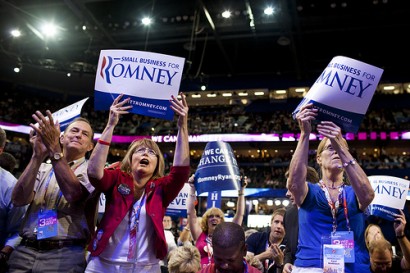 American voters are faced with a stark choice, not only about who will lead the nation in the next four years, but about what our shared future will be like. At the deepest and most profound, it is a decision about what America stands for. About what we stand for.

The conventions in Tampa and Charlotte – the crowds, the platforms, and the speeches – provided the contrast. Immigrants, their families and their communities now have to decide with whom they will cast their lot. Which party and ticket will assure them of their proper place as Americans and help them secure their American dream?

I’d like to think that the answer is obvious, and the numbers show that a majority of immigrants do know who has their interests in mind. But there are some who for whatever reason refuse to see the truth.

A woman immigrated to the United States in the 1970s, worked hard, and sacrificed in order to help her family back in the Philippines and those who came with her. She has accomplished a lot: rising up the ranks in the company where she has worked for decades, and supporting her family here and abroad.

In so many ways she has accomplished her American dream. But as a middle-class woman of color, she has also been held back. She has been denied promotions in spite of her credentials and hard work. Countless times has she complained of less qualified men surpassing her for jobs she can do with her eyes closed. It wouldn’t be a stretch to say that this was because of her gender. I wonder how much of it had to do with her ethnicity and accent.

She was supposed to retire a couple of years ago but the Great Recession happened. Her investments and the value of her home went under. She has little choice but to keep waking up at the crack of dawn, getting on a commuter train, and putting in her eight hours. She is tired but she does what needs to be done.

And she blames Barack Obama. She faults the man who signed the Lilly Ledbetter Act and who fought hard to keep our country from falling into a financial abyss. The man who wants to safeguard Social Security and Medicare for older Americans like her.

She listens to Fox News and Rush Limbaugh. She is a hardcore Republican. She believes that Democrats promote dependency on government and that so many abuse system. She refuses to see and admit who is really responsible for her setbacks.

I doubt she watched the Democratic convention. I wish she had. She would have seen so many other Americans of color like her. Not as tokens but as valued members whose voices are heard. She would have learned of policies that safeguard and promote her and her family’s well-being. She would recognize her own family’s story in the struggles and successes of Michelle’s and Barack’s families. She would have heard the man she despises tell her that he thinks of her and her family when making hard decisions. She would have been assured that no one gets a free ride but that together we can create a better future. She would have heard the President’s passionate argument that “no American should ever have to spend their golden years at the mercy of insurance companies. They should retire with the care and the dignity they have earned.”

Like many other immigrant Americans, she will go to the polls on November 6 and cast her vote. How I wish she realizes who really sees her, hears her, and embraces her as an immigrant and as a woman. It should be crystal clear to her who has her and her family’s future in his heart and mind. Sadly, it isn’t.