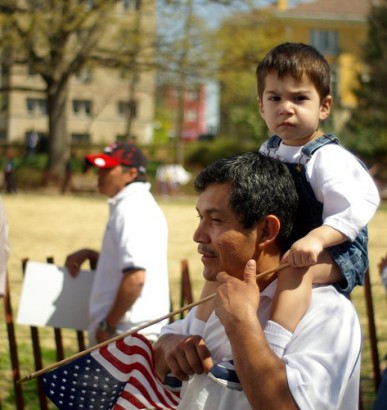 Fi2W’s John Rudolph sat down with Chung-Wha Hong of the New York Immigration Coalition and Mark Hugo Lopez of the Pew Hispanic Center to preview the discussion we’ll be hearing next Thursday, October 18 at the “Unlocking the Latino Vote” town hall
at The New School.

Listen to the podcast.

Your browser does not support the audio element.

The Latino vote could determine who becomes the next president. According to Lopez, Latinos helped Obama in key states in 2008 and Harry Reid in Nevada in 2010. Most Latinos don’t live in this year’s battleground states—at least half of all Latino voters live in California or Texas—but in contested states like Colorado, Nevada, Virginia, North Carolina and Florida, demographic shifts since ‘08 have pushed up the share of Latino eligible voters. This could have a major impact, Lopez says.

The Latino vote is closely tied to the issue of immigration but the economy, education and healthcare are all issues Latinos respond to strongly.

One of the reasons immigration ranks so high says Hong is that it remains unresolved. In 2008, Obama promised to pass reform within his first year in office. Instead he oversaw a record number of deportations. Jobs and healthcare, she says, are important but “immigration remains a litmus test for whether a candidate cares about Latinos.”

“If a candidate comes out opposing the DREAM Act, it’s not just a policy position,” she says.  DREAMers represent the pride and joy of Latino and immigrant communities and if someone comes out against the DREAM Act, like Romney did, it has major repercussions. For this reason, Hong doesn’t expect Romney to get the 40 percent support among Latinos that George W. Bush got.

According to Lopez, the economic downturn has had major ramifications for Latino communities: Right now more Latino children live in poverty than any other group – a first for Latinos. More wealth was lost in the recession by Latinos than any other group. And while there has been improvement in Latino unemployment, it is still two points above the national average of 7.8 percent.

But Lopez says, despite being hard hit by the downturn there remains strong support for the president across every Latino demographic group, except the traditionally more conservative groups like Cuban Americans and protestant Latinos.

According to Hong, support for Democrats among immigrants is not a given. However, the Deferred Action for Childhood Arrivals (DACA) program has proven very popular. Close to 100,000 young people have applied, meaning a large bloc of people will soon be getting work permits and protection from deportation.

Click the image to RSVP for the townhall discussion.

According to Hong, a vast majority of immigrant citizens know someone who’s undocumented and consequently know someone who’s eligible to get a work permit through DACA. Similarly, says Hong, the movement in many states to disenfranchise minority voters through shorter voting hours and stricter ID laws could backfire. When people feel attacked, as they did in Nevada in 2010 and in Arizona now, she says, it is a powerful motivating factor to show up and vote.

According to Lopez’s research, a majority of Latinos say they would support Obama over Mitt Romney in a head to head contest. Democrats are still seen as the better party for Hispanics than Republicans and polls have shown stable support for Obama among Latinos over the last ten months. But how many Hispanics will vote? Hard to predict, but because of demographic changes, Lopez thinks it’s likely we will see more Latino voters than we did in 2008.

Hong thinks health care tends to be overlooked when discussing issues Latinos care about. Obama’s health care reform, when implemented, will see an 18 percent increase in the number of Latinos covered. Many Latinos work in places where employers don’t offer healthcare and, Hong believes, Romney’s pledge to repeal Obamacare will lose him support. But how Romney talks about immigration reform, as he’s promised to do in the upcoming debate could greatly affect how Latinos vote in November.

The Oct. 18 town hall is cosponsored by Latino USA, Americas Society/Council of the Americas, and the New School’s Center for New York City Affairs and Global Studies programs.