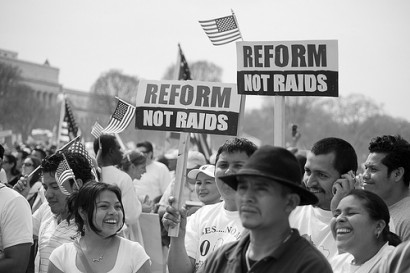 The debate last week between Vice President Joe Biden and Rep. Paul Ryan, like the first presidential debate, did not tackle immigration. A few folks, seeing the digits on their computer clocks near the 90 minute mark, tweeted out loud, “Will immigration, LGBTs, and women be mentioned at all?” Martha Raddatz, the moderator, did ask about abortion at the end, but clearly immigration was not a top domestic issue for her. I suspect it isn’t for the debaters either.

Interestingly, two reports reveal that immigration is not a top issue for immigrant communities either.

The Pew Hispanic Center released a report Thursday that rates education, jobs and the economy, and health care as the top three issues for registered Latino voters. Fifty-five percent of those surveyed said the issue of education is extremely important to them, followed by 54 percent who cited jobs and the economy, and 50 percent who cited health care.

Earlier this month, initial findings from the 2012 National Asian American Survey was rolled out showing that the economy is also the most important issue for Asian Americans, followed by unemployment, health care, and education. Fifty-two percent of survey-takers said the economy was the most important problem facing the country today. Close to 20 percent pointed to unemployment, five percent cited health care, and four percent cited education.

Nonetheless, politicians and political parties should not take these numbers as an indication that immigration is not important to communities of color. After all, the majority of foreign-born individuals living in the U.S. – 40 million or 12.9 percent of our population – are from Latin America and Asia. About 1 in 4 children belong to families with at least one immigrant parent.

The Pew Hispanic Center study found that immigration is extremely important personally to a third of Latino registered voters.

We are talking about family members, friends, and neighbors after all, loved ones who would benefit from a reformed immigration system. The party that shows genuine concern for immigrants and their families by pushing for rational reform will reap support and votes beyond this election cycle.

Pew’s findings confirm what we all know: the Democratic Party has a lock on Latinos. It appears that in the past year alone, there was a sharp rise in the share of Latinos who identify the Democratic Party as the one that has more concern for Latinos. Sixty-one percent of those surveyed say this, up from 45 percent in 2011. This is no surprise considering the virulent anti-immigrant rhetoric spewed during the Republican presidential primaries.

As for Asians, there is still the need to stress that they are a voting bloc that cannot be ignored. Although AAPIs overall do tend to lean Democratic, the 2012 National Asian American Survey shows that the party does not enjoy the loyalty of most and certainly not all Asians. There is enough room for the GOP to come in and win more Asians to their side.

Immigration may be ignored during the remaining debates and will most likely be invisible in the flurry of last minute campaign messages, but it is an issue that will not go away.