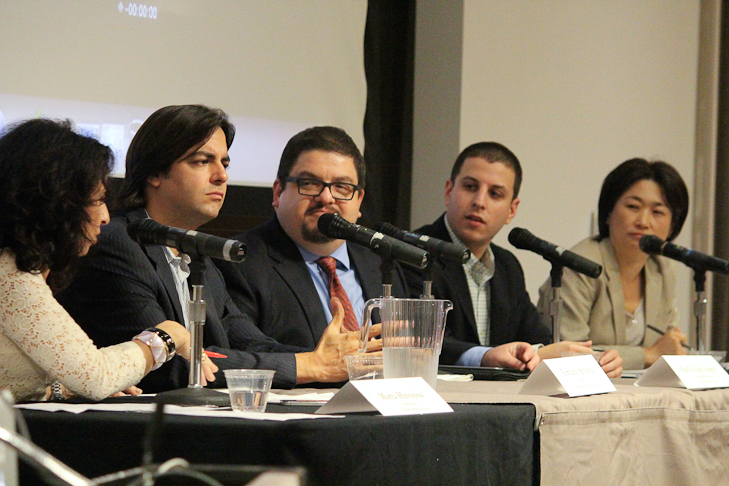 We present excerpts from a conversation with pollsters, reporters and policy experts on how the issues of immigration and the economy are driving the decisions of Latino voters. This event at The New School in New York City was part of the project Ballot Voices in collaboration with Feet in Two Worlds. Fernand Amandi, managing partner at Bendixen & Amandi International, brings over a decade’s worth of experience in research and strategic management with an emphasis in corporate, political and public affairs consulting for clients including the United Nations, the Inter-American Development Bank, the World Bank, Univision, New America Media, the White House, the John & James L. Knight Foundation, the California Endowment, US Senator John Kerry and US Senator Robert Menendez.

He is a graduate of Florida State University with a Bachelor’s degree in Social Science Education. Jordan Fabian is the political editor for ABC News/Univision. Prior to joining Univision in 2011, he worked as a staff writer at The Hill newspaper in Washington, DC where he covered Congress and the 2012 presidential campaign. Jordan has appeared on MSNBC, Fox News, ABC News digital broadcasts, and C-SPAN, and has contributed to a number of nationally-syndicated radio programs. He also freelanced for Hispanic Business magazine and Letras Libres. Jordan hails from Olney, Maryland and is a lifelong resident of the Washington area. He graduated from Cornell University with a bachelor of arts in history. Chung-Wha Hong is Executive Director of the New York Immigration Coalition, an umbrella advocacy organization made up of approximately 200 groups throughout the state that work with immigrant and refugee communities. As the coordinating body for organizations that serve one of the largest and most diverse newcomer populations in the United States, the NYIC has become a leading advocate for immigrant communities on the local, state, and national levels. The NYIC’s membership includes grassroots community organizations, not-for-profit health and human services organizations, religious and academic institutions, labor unions, and legal, social, and economic justice organizations. With its pan-immigrant, multi-sector base, the NYIC provides both a forum for immigrant groups to share their concerns and a vehicle for collective action to address these concerns. The NYIC has registered over 300,000 new American voters to date, and is currently coordinating “Immigrants Vote!” – a multi-ethnic voter mobilization campaign in New York State. Mark Hugo Lopez is the associate director of the Pew Hispanic Center where he studies the attitudes and opinions of Latinos, the political engagement of Latinos and Latino youth. Lopez also coordinates the Center’s national surveys. He received his Ph.D. in economics from Princeton University in 1996.

One thought on “IMMIGRATION VS. THE ECONOMY: WHAT WILL UNLOCK LATINO VOTES?”