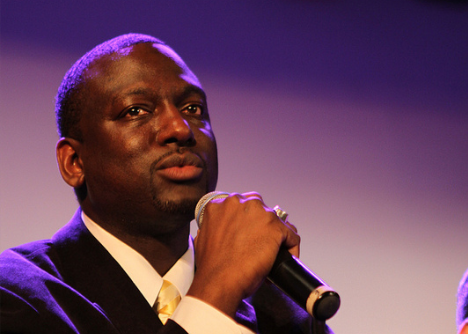 Yusef Salaam, one of the exonerated teens convicted of rape in the Central Park jogger case, talks about life after prison and about watching himself on screen in the film The Central Park Five. Yusef Salaam was born and raised in New York City. He attended Public School 83, Manhattan East, The Arts Student League of New York and studied art at LaGuardia High School of Music & Art and jewelry making at the Fashion Institute of Technology. On April 19, 1989, at just 15 years of age, he learned that he, along with other young boys were being falsely arrested for rape. Yusef Salaam served approximately 7 years of his life in prison along with 3 years on parole. Now a proud father, Yusef advocates for education, the need for videotaping of all police interrogations, for policy change in the child welfare system & the prison industrial complex, the effects of the disenfranchisement of poor people and its overwhelming effects on their families and the entire community at large. He sits on the Board of the Campaign to End the Death Penalty, the advisory Board for The Learn My History Foundation: dedicated to Youth Empowerment, Education and Change, and is the inspiration behind People United for Children.

One thought on “LIFE AFTER CENTRAL PARK”