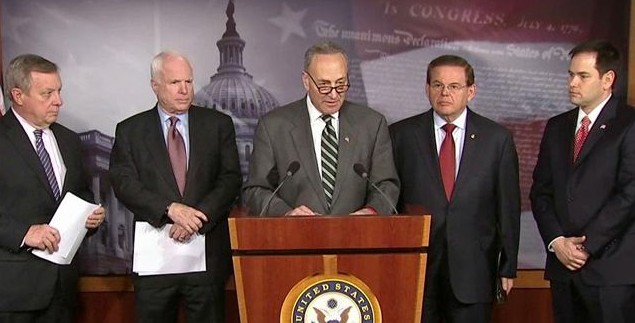 Two proposals for comprehensive immigration reform were released this week, from a bipartisan Senate committee and from President Obama. As we launch into political negotiations for more detailed plans, we ask: is this a breakthrough, or are we headed to another impasse as in previous years? We speak to New York Times reporter Julia Preston about the developing plans. Julia Preston was a member of The New York Times staff that won the 1998 Pulitzer Prize for reporting on international affairs for its series that profiled the corrosive effects of drug corruption in Mexico. Ms. Preston came to The Times in July 1995 after working at the Washington Post for nine years as a foreign correspondent. She is a 1997 recipient of the Maria Moors Cabot Prize for distinguished coverage of Latin America and a 1994 winner of the Robert F. Kennedy Award for Humanitarian Journalism.

Born in Lake Forest, Ill., on May 29, 1951, Ms. Preston received a B.A. degree in Latin American Studies from Yale University in 1976. She speaks fluent Spanish and Portuguese. She has one daughter.