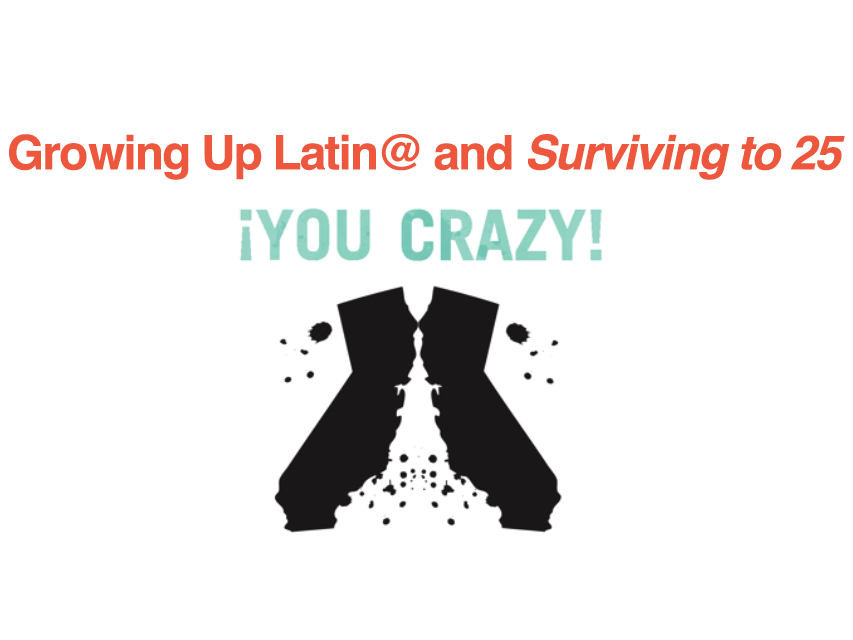 This event was part of a series of free public Latino USA events on health in California.

Watch the recording of this ground-breaking event:

Growing Up Latino and Surviving to 25 from The Futuro Media Group on Vimeo.

Scroll down for photos from this event.

Surviving the emotional roller coaster of adolescence is a double and sometimes triple challenge for Latin@ youth. Culture and tradition complicate universal adolescent issues like anxiety, depression, peer pressure, and relationships. Youth in immigrant families often have difficulty navigating the different worlds of school and the streets, home and family. Family separations, mislabeling/misdiagnosis, and pressure to “be quiet” further complicate the challenges to emotional well-being. Where do young people go to get support? Do counselors and mental health professionals understand cultural factors? Do they even literally speak the same language?

A panel of renowned speakers explore the challenging ground of growing up Latino/a. Dr. Sergio Aguilar-Gaxiola and Dr. Lina Mendez share key findings from a June 2012 study of the landscape of mental health services for Latinos in California. Dr. Luis Zayas shares findings from his 25 years of research on Latina suicide and family separation. Three youth leaders—Nicole Plata, Claudia Mendez, and Nikko Gabriel Reynoso—speak about their personal experiences surmounting the myriad challenges of growing up, coping with (mis)diagnosis, foster care, identity, coming out, family, and themselves. Excerpted recordings from an exclusive January 2013 interview with Supreme Court Justice Sonia Sotomayor explore her childhood and coming to terms with family issues.

Listen to the radio story:

Dr. Sergio Aguilar-Gaxiola
Sergio Aguilar-Gaxiola, M.D., Ph.D., is Professor of Clinical Internal Medicine, the Founding Director of the UC Davis Center for Reducing Health Disparities (CRHD), the Director of the Community Engagement Program of the UC Davis Clinical Translational Science Center (CTSC), and Co-Director of the National Institute of Aging (NIA) funded Latino Aging Research and Resource Center (LARRC). He has nearly 30 years of experience working in the mental health field as a researcher, clinician, professor, and advocate. Dr. Aguilar-Gaxiola has created a substantive applied research program that focuses on cross-cultural comparative epidemiologic research on patterns and correlates of mental disorders, substance abuse and health conditions; the identification of unmet health and mental needs and associated risk and protective factors in underserved populations; community-engaged approaches to reducing health disparities in underserved populations; and quality of care improvement through the provision of culturally and linguistically appropriate services.

Dr. Aguilar-Gaxiola’s most recent work is focused on translating and bridging research with services delivery and policy development. He has been appointed to numerous policy and research advisory boards, at the local, state, national and international levels, including a four year appointment to the National Advisory Mental Health Council of the National Institute of Mental Health (NIMH) and the World Health Organization (WHO). His work has been nationally recognized; in 2005 he was awarded the U.S. DHHS’ Office of Minority Health’s National Minority Health Community Leader Award (Hispanic Community).

Dr. Lina Mendez
Lina R. Méndez Ph.D is a postdoctoral scholar in the Department of Internal Medicine at the UC Davis Medical Center, and a project manager for the Center for Reducing Health Disparities (CRHD). Her work focuses on identifying evidence-based best practices for prevention and early intervention for Latinos in mental health. Through this, she has conducted community-based forums across California to investigate the unmet mental health needs of Latinos throughout the state. She documented their voices in both rural and urban areas as well as the Latino Lesbian, Gay, Bisexual, Transgender, Questionable (LGBTQ) community.

Nicole Plata
Nicole Plata is the Youth Initiatives Coordinator for the Mental Health Association of San Francisco. She is a passionate and uncompromising advocate for Transitional Aged Youth (TAY) in the mental health system. Her passion is rooted in her own experience with trauma and is inspired by the investment of her mentors and her faith in God.

She is a native of East Side San Jose, and identifies as a Mixed-Race Latina of Panamanian and Puerto Rican descent. Having overcome a variety of challenges in her youth, from abuse and community violence to involvement in the criminal justice system and a traumatic brain surgery, Nicole offers a well-informed perspective to those she works with. She seeks to use her perspective and experience to advocate and inform services for the diverse youth of California. She does this through her work for the Mental Health Association of San Francisco and her involvement on various Transition Age Youth advocacy groups within San Francisco County and statewide. In her free time, Nicole is an artist and muralist who loves to awaken her roots through salsa dancing.

Nikko Gabriel Reynoso
Nikko Reynoso is a Chicano trans* activist committed to social justice, gender equity, and anti-racist advocacy. From East Side San Jose, he speaks on issues relating to the intersections of identity, including sexuality, race, gender, and class. He is also a 3rd year UC Davis student studying Women and Gender studies, Chicana/o studies and Sociology.

Claudia Mendez
Claudia Mendez is a 22 years old student at San Francisco State University. She was born and raised in the Mission District of San Francisco, CA, and was placed in foster care at the age of 16 because of family abuse. After realizing that there were many gaps in the foster care system, Claudia decided that she wanted to be an advocate for her community and help change different systems to better the lives of other young people. She is proudly a San Francisco State University Guardian Scholar pursuing a Bachelors degree in Comparative World Literature and plans to attend law school to become a dependency lawyer. She is also a member of Honoring Emancipated Youth and trainer at Transitional Youth Initiative. Besides school, some of Claudia’s hobbies are photography, soccer with friends and family, and scrapbooking.

Maria Hinojosa, Moderator
CEO and President, The Futuro Media Group
For 25 years, Maria Hinojosa has helped tell America’s untold stories and brought to light unsung heroes in America and abroad. In April 2010, Hinojosa launched The Futuro Media Group with the mission to produce multi-platform, community-based journalism that respects and celebrates the cultural richness of the American Experience. She is the anchor and Executive Producer of her own long-running weekly NPR show, Latino USA, anchor of the Emmy Award winning talk show Maria Hinojosa: One-on-One from WGBH/La Plaza, Contributing Correspondent for Frontline and Need to Know on PBS.

Prior to launching The Futuro Media Group, Hinojosa was a Senior Correspondent for NOW on PBS, the CNN Urban Affairs correspondent for 8 years, a reporter for NPR, and producer for CBS Radio. She has written two books, including her motherhood memoir: “Raising Raul: Adventures Raising Myself and My Son.”

Hinojosa has won top honors in American journalism including four Emmy’s, the John Chancellor Award, the Studs Terkel Community Media Award, the Robert F. Kennedy Award for Reporting on the Disadvantaged, the Edward R. Murrow Award from the Overseas Press Club for best documentary for her groundbreaking Child Brides: Stolen Lives, and the Ruben Salazar Lifetime Achievement Award from the National Council of La Raza. In 2009, Hinojosa was honored with an AWRT Gracie Award for Individual Achievement as Best TV Correspondent. In 2011 she received honors from the New York Women’s Foundation, Hispanics in Philanthropy, and The Opportunity Agenda.

CHECK OUT THE ONLINE CONVERSATION:

MADE POSSIBLE WITH THE SUPPORT OF: