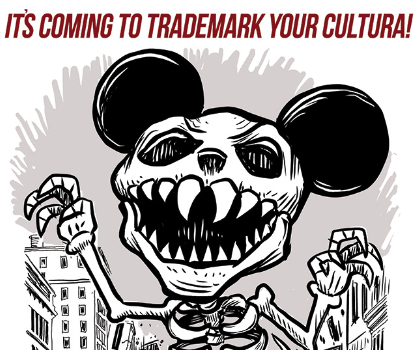 When Disney tried to trademark “Dia de los Muertos” for their new movie merchandise inspired by the Mexican holiday, Latinos went online and turned things back around. For this week’s “News or Noise?” Latino USA guest host Luis Antonio Perez speaks with Kety Esquivel, digital media strategist and Vice President for Fenton, about how Latinos online retaliated against the entertainment giant.

Illustration by Lalo Alcaraz; Image courtesy of Pocho.Com, where you can see the whole illustration.

Having trouble taking the quiz on your mobile device? Go to the quiz directly here.

Kety Esquivel leads the digital practice for Fenton’s Western region with nearly 20 years of experience in the private and public sectors. Her commentaries has been featured in stories on the Wall St. Journal, HITN, PBS, CNN, Televisa and Univision. She also served as the New Media Manager for the National Council of La Raza and the interim CEO for Latinos in Social Media.

Lalo Alcaraz is the creator of the first nationally-syndicated, politically-themed Latino daily comic strip, “La Cucaracha,” seen in scores of newspapers including the Los Angeles Times. He is also co-host of KPFK Radio’s popular satirical talk show, “The Pocho Hour of Power,” and co-founded the political satire comedy group Chicano Secret Service. His work has appeared in major publications around the world and he has won numerous awards and honors. Alcaraz received his Bachelor’s degree from San Diego State University, and earned his master’s degree in architecture from the University of California, Berkeley. He is currently a faculty member at Otis College of Art & Design in Los Angeles. Alcaraz was born in San Diego and grew up on the border. He is married to a hard-working public school teacher and they have three extremely artistic children. Marshall Leaffer is a copyright-law expert and professor at Indiana University’s Maurer School of Law.