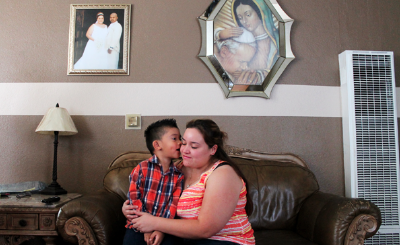 The ACLU filed a lawsuit last week against the U.S. government alleging that immigration officers are pressuring undocumented immigrants into signing their own deportation orders and waiving their rights to appear before an immigration judge. John Carlos Frey reports.

John Carlos Frey is a freelance investigative reporter and documentary filmmaker based in Los Angeles. His investigative work has been featured on the 60 Minutes episode, “The All American Canal;” a three-part series for PBS entitled “Crossing the Line;” and several episodes of Dan Rather Reports, “Angel of the Desert,” and “Operation Streamline.” In 2011 Frey documented the journey of Mexican migrants across the US-Mexico border and walked for days in the Arizona desert risking his own life for the documentary Life and Death on the Border”. John Carlos Frey has also written articles for the Los Angeles Times, the Huffington Post, Salon, Need to Know online, the Washington Monthly, and El Diario (in Spanish). Frey’s documentary films include The Invisible Mexicans of Deer Canyon (2007), The Invisible Chapel (2008), and The 800 Mile Wall (2009). He is the 2012 recipient of the Scripps Howard Award and the Sigma Delta Chi award for his Investigative Fund/PBS reporting on the excessive use of force by the US Border Patrol.