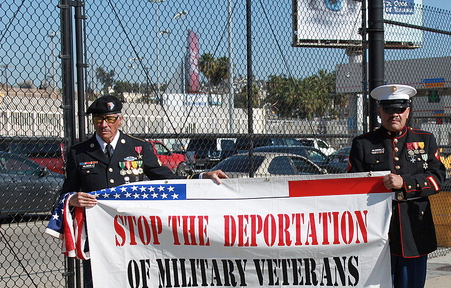 Serving in the military can help immigrants gain U.S. citizenship. But vets who commit crimes may find themselves deported despite their service to the country. Latino USA speaks with a vet awaiting deportation and with filmmaker John Valadez, currently working on a documentary highlighting the cases of veterans who have been deported.

John Valadez is an award-winning director who has been producing documentaries for PBS for the last X years. He has been a New York Foundation for the Arts Fellow, A Rockefeller Fellow and is a founding member of the New York Chapter of the National Association of Latino Independent Producers. He has worked on projects for Carleton UK Television, Frontline, American Masters, CBC, TLC and HBO.

Craig Shagin is a lawyer in private practice in Pennsylvania, where egis firm is active in immigration law. He is a member of the American Immigration Lawyers Association. He has authored numerous articles and books on various aspects of immigration law, including “Deporting Private Ryan: The Less Than Honorable Condition of the Non-Citizen in the United States Armed Forces.”