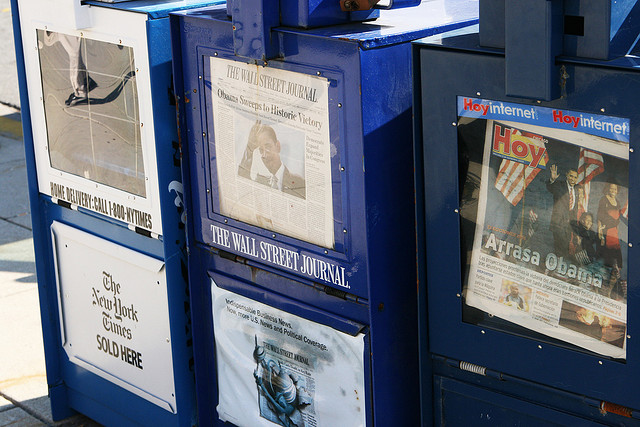 In this installment of our “News or Noise?” feature, Latino USA producer Daisy Rosario asks students and a journalism professor about whether certain news sources have more authority and legitimacy, and the role of ethnic media in telling the stories of communities of color.

The young journalists featured got their start in ethnic media and community reporting at the Mott Haven Herald and Hunts Point Express.

“News Or Noise?” is a regular segment where Latino USA explores issues around news literacy.

Having trouble taking the quiz on your mobile device? Go to the quiz directly here.

Angely Mercado is a 21 year old Hunter College student who is currently studying Creative Writing and Journalism. She hopes to eventually become a freelance journalist and fiction writer, or a staff writer for the New York Times. Until then, she’ll continue to intern and enter as many writing contests as she possibly can. Apart from being a student and aspiring writer, Angely also randomly longboards and does photography. Those activities help the creative process.

Fausto Giovanny Pinto is a reporter from the Bronx who has written for a host of community newspapers in the Borough. He is currently a student at the CUNY Graduate School of Journalism. He has Interned with Newsday and is currently a stringer for the New York Times.

Shanice Carr is a student journalist currently attending Hunter College to study English with a concentration in Linguistics and Rhetoric.

Maite Junco has been an editor and reporter for over 20 years. She spent 15 years at the New York Daily News in three different stints between 1995 and 2012. Maite was part of the team that led the paper’s award-winning coverage of the Blackout of 2003 and the Abner Louima police brutality case. She currently serves as editor of Voices of NY.

Maite has a B.A. in Journalism and Latin American Studies from the University of Massachusetts at Amherst. She also studied abroad in Paris, Buenos Aires and Salamanca, Spain. Born in San Juan to Cuban parents, Maite lives in East Harlem.