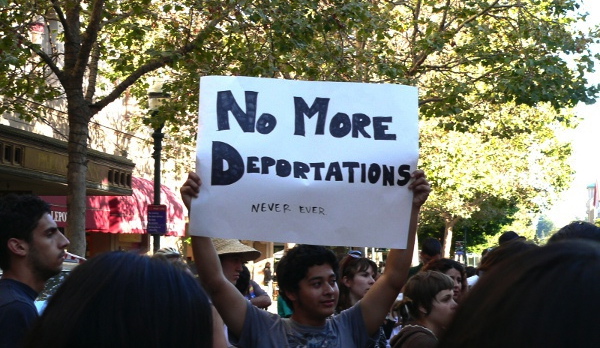 While immigration reform is stalled in Congress, over 1,000 people are deported each day. This human cost of inaction from legislators has spurred immigrant advocates to up the ante on the fight for immigrant rights. Latino USA talks with organizers about why – and how- they continue to push for action.

Israel Rodrigues Rubio is one of 30 DREAMers –undocumented youth brought to the US as children – who crossed the border on September 30th, 2013 as an act of civil disobedience organized by the National Immigrant Youth Alliance. He grew up in Durham, Nort Carolina and is a graduate of Columbia University. Despite all his successes, Israel’s undocumented status limited him in pursuing his dreams. By 2011, being a couple of months away from graduation, Israel settled on leaving for Mexico. In Mexico City, Israel had trouble integrating into a society he barely knew and was surrounded by increasing violence and political instability. In 2013 He decided he wanted to return to his family in the US.

David Wolfe Leopold is the founder and principal of David Wolfe Leopold & Associates Co. LPA. Mr. Leopold is the past president of the Washington, D.C.-based American Immigration Lawyers Association (AILA www.aila.org), the premier bar association of immigration lawyers and professors in the U.S. He has served as AILA’s top liaison to the Department of Homeland Security’s key enforcement bureaus and co-founded the American Immigration Council’s Litigation Institute, a hands-on continuing legal education program focused on federal immigration litigation.

Gabriela Flora is the Regional Project Voice Organizer of the American Friends Service Committee, Colorado. The organization is part of the Colorado Immigrant Rights Coalition, which succeeded in its fight to repeal SB-90, Colorado’s copycat Arizona-style show-me-your-papers law in 2012. In 2013 the Coalition had another victory – the approval of a law allowing for undocumented immigrants to access drivers’ licenses.