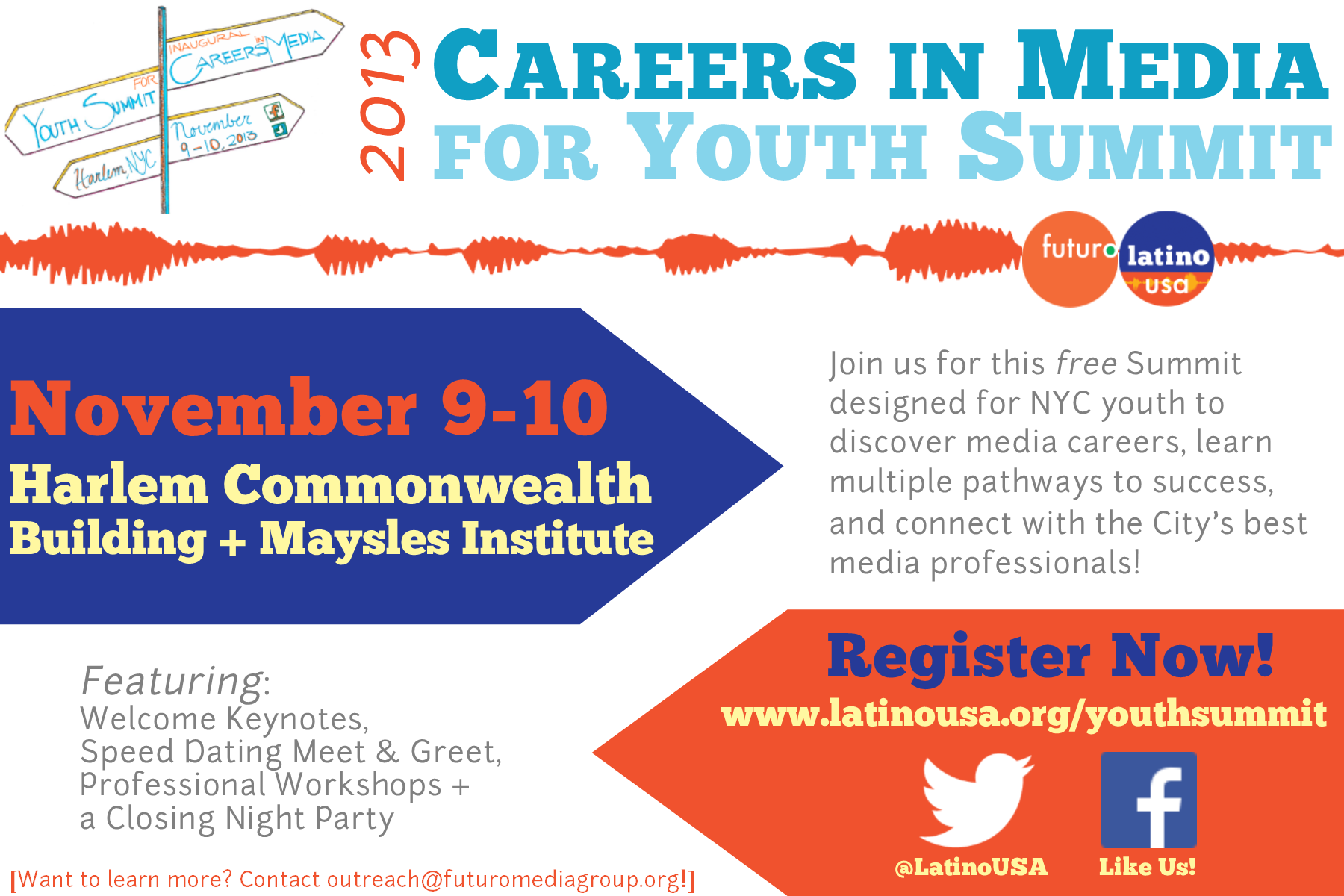 DESCRIPTION:
This FREE Summit helped aspiring journalists and filmmakers from Harlem and across NYC to discover media careers, learn multiple pathways to success, and connect with the City’s best multimedia professionals and organizations. The weekend inspired youth of all backgrounds and experiences to pursue careers in media with the clarity and confidence they need to reach their dreams! Listen to Keynote Addresses by Stanley Nelson and Maria Hinojosa

The Futuro Media Group invited emerging media makers to its inaugural Careers in Media for Youth Summit in West Harlem. Through this event, we hoped to inspire 16 to 25-year-old youth from diverse backgrounds to pursue careers in media, with the tools, support, and encouragement they need to achieve their goals to become a journalist, radio producer, documentary filmmaker, other career in the media, or just wanted to learn more!

To kick-off the weekend, we opened with an address from Maria Hinojosa, award-winning journalist, news anchor, author, and founder of The Futuro Media Group, and a keynote lecture from Stanley Nelson, a distinguished documentary filmmaker and executive director of Firelight Media. Afterwards, we hosted a fun “Speed Dating” event, an easy way to connect youth with media professionals. This provided the chance for attendees to speak directly with organizations and learn about opportunities for hands-on training, ways to start a career in media (like internships or fellowships), or to start their own video, radio, or digital production. On Sunday, we hosted workshops and training sessions to provide deeper insight into media careers as a means to share real-life stories and the multiple roads to success. To end this exciting event, we had have a closing night party!

For 25 years, Maria Hinojosa has helped tell America’s untold stories and brought to light unsung heroes in America and abroad. In April 2010, Hinojosa launched The Futuro Media Group with the mission to produce multi-platform, community-based journalism that respects and celebrates the cultural richness of the American Experience. She is the anchor and Executive Producer of her own long-running weekly NPR show, Latino USA, anchor of the Emmy Award winning talk show Maria Hinojosa: One-on-One from WGBH/La Plaza, Contributing Correspondent for Frontline and Need to Know on PBS. Prior to launching The Futuro Media Group, Hinojosa was a Senior Correspondent for NOW on PBS, the CNN Urban Affairs correspondent for 8 years, a reporter for NPR, and producer for CBS Radio. Full bio

Stanley Nelson is a documentary filmmaker and Revson fellow, who received his B.F.A. from the City College of New York before moving on to the American Film Institute and Columbia University. He has since taught at numerous universities and served on many prestigious committees, including jury positions at the Sundance Film Festival. He was also the recipient of a MacArthur Foundation Fellowship and the executive producer of Firelight Media, a non-profit production company he founded with partner and writer Marcia Smith. Full Bio

Storytelling Workshop: “Where the story is…”

How to be a Film Programmer

PLUS more than 15 organizations and media professionals!