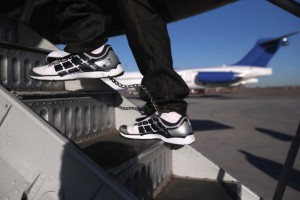 MESA, AZ – FEBRUARY 28: A Honduran immigration detainee, his feet shackled and shoes laceless as a security precaution, boards a deportation flight to San Pedro Sula, Honduras on February 28, 2013 in Mesa, Arizona. U.S. Immigration and Customs Enforcement (ICE), operates 4-5 flights per week from Mesa to Central America, deporting hundreds of undocumented immigrants detained in western states of the U.S. With the possibility of federal budget sequestration, Most detainees typically remain in custody for several weeks before they are deported to their home country, while others remain for longer periods while their immigration cases work through the courts. (Photo by John Moore/Getty Images)