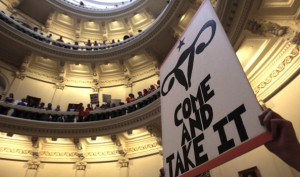 AUSTIN, TX – JULY 01: Supporters of Texas women’s right to reproductive decisions rally at the Texas State capitol on July 1, 2013 in Austin, Texas. This is first day of a second legislative special session called by Texas Gov. Rick Perry to pass an restrictive abortion law through the Texas legislature. The first attempt was defeated after opponents of the law were able to stall the vote until after first special session had ended. (Photo by Erich Schlegel/Getty Images)