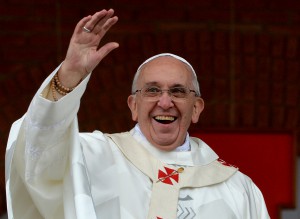 Pope Francis waves to the crowd gathering outside the Basilica of Our Lady of Aparecida, Brazil’s most revered Catholic shrine, after he celebrated mass there, in Aparecida, Sao Paulo State, on July 24, 2013. Pope Francis warned Catholics on Wednesday against “ephemeral idols” like money at his first public mass in his native Latin America as huge crowds lined the streets to cheer him. The first Latin American and Jesuit pontiff visited Aparecida to lead his first big mass since arriving in the country for a week-long visit of which highlight is the huge five-day Catholic gathering World Youth Day. AFP PHOTO/LUCA ZENNARO/POOL (Photo credit should read LUCA ZENNARO/AFP/Getty Images)