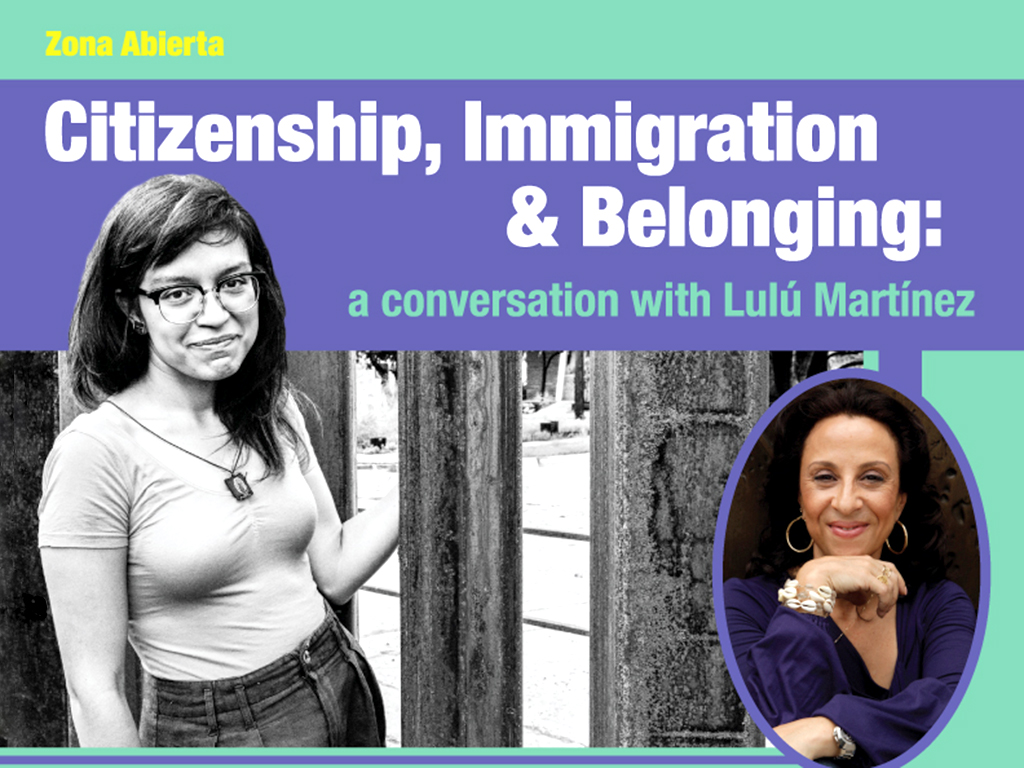 Lulú Martinez is a 2013 “Chicagoan of the Year,” an immigration reform activist, one of the Dream 9, and a student at UIC. Maria Hinojosa and Lulú had an in-depth conversation about citizenship, belonging, courage, activism, and leadership.

Lulú Martínez is an undocumented queer Chicana from Mexico City and a student at UIC in the Gender and Women’s Studies Department at the University of IL at Chicago. She is also a member of the Fearless Undocumented Alliance (FUA). She immigrated to the U.S. with her parents and brother at the age of three and began organizing after one of her peers was put into deportation proceedings. She helped co-found the Immigrant Youth Justice League (IYJL), a Chicago-based undocumented youth-led organization. Lulú spent two years organizing in the Southeast with the Georgia Undocumented Youth Alliance (GUYA) and Southerners On New Ground (SONG), from whom she learned to apply a feminist theoretical lens into her work and vision. Her shared identities and experiences continue to encourage her to move towards a path of truth-seeking, deep spiritual and political thought and organizing efforts that recognize multiplicities in the spaces she shares. More recently, she participated in the DREAM 9 action and self-deported to Mexico as a way of overcoming physical and imagined borders to help organize a border action in which several families who had previously been separated by deportation were able to return home to the U.S.. She is currently organizing the third Bring Them Home campaign in which 150 families will turn themselves into Immigration and Customs Enforcement (ICE) and ask for re-entry into the U.S. to be reunited with their families.

Maria Hinojosa has a 25-year history as an award-winning journalist including executive producing and anchoring both a radio show and television series: Latino USA, distributed by NPR, and America By The Numbers with Maria Hinojosa, airing this fall on PBS and the WORLD Channels. In 2010, she launched the Futuro Media Group to produce journalism giving voice to a more diverse America.

Hinojosa has reported for PBS, CNN, NPR, Frontline, and CBS Radio and anchored the Emmy Award winning talk show Maria Hinojosa: One-on-One. She is the author of two books and has won dozens of awards, including: four Emmys, the John Chancellor Award, the Studs Terkel Community Media Award, the Robert F. Kennedy Award, the Edward R. Murrow Award, and the Ruben Salazar Lifetime Achievement Award. She is currently the Sor Juana Ines de la Cruz Chair of Latin American and Latino Studies at DePaul University in Chicago, and lives with her husband and their son and daughter in New York.

DIRECTIONS:
Campus Map: The Latino Cultural Center is located east of the Richard Daley Library, adjacent to the central Plaza. By CTA “L” Train: Take the Blue Line toward Forest Park to the UIC Halsted stop. That is right at Harrison & Halsted. Walk to the campus Quad and the Latino Cultural Center is on the Quad Plaza.


—
MADE POSSIBLE BY:
This event was hosted by the Futuro Media Group, producer of Latino USA, and the UIC Latino Cultural Center, and supported by the Ford Foundation.

4 thoughts on “Citizenship and belonging: a conversation with Lulú Martínez”