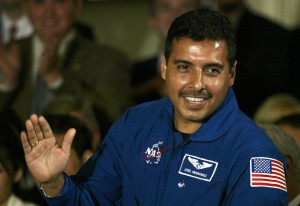 WASHINGTON, UNITED STATES: Mexican astronaut Jose Hernandez waves to guests after being introduced by US President George W. Bush during Cinco de Mayo celebrations 05 May 2004 in the East Room of the White House in Washington, DC. Bush said that Hernandez’s mission will be announced 06 May 2004 in a ceremony at NASA headquarters in Washington, DC. AFP Photo/Paul J. Richards (Photo credit should read PAUL J.RICHARDS/AFP/Getty Images)