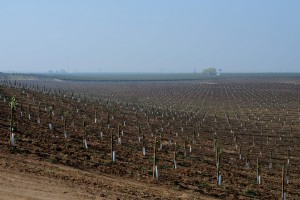 Young citrus trees grow in Ducor, CA on November 8, 2014. California is in the third year of a severe drought which has resulted in over 800 million in crop loss in 2014 alone. Because adult citrus trees require a lot of water some farmers have opted to pull out old groves and replace them with saplings that require much less water in the hopes that water will be less scarce in the future. (Photo/Sean Havey)