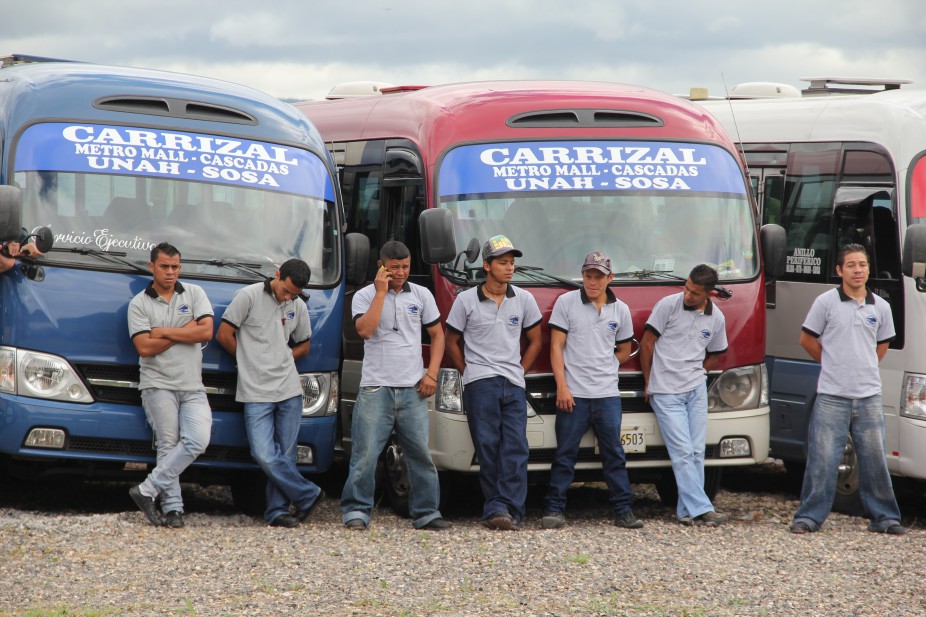 Photo above shows attendants who clean buses and hang out at a Tegucigalpa bus station. Because of gang extortion, working anywhere in the transportation sector can be risky. Gangs will kill workers as punishment for missing or late payments. A plane of deportees from the U.S. arrives at the Centro de Atención al Migrante Retornado in San Pedro Sula. Their belongings are piled up in the center of the room. As deportees from the U.S. step off the plane and into a processioning center, volunteers hand out cups of black coffee and baleadas – a Honduras snack – to welcome them. Jose Hernandez greets his young son outside El Edén, the center where deported kids are sent in Honduras. His wife and two young children had just been deported from Mexico. Recently deported families get on a bus and continue on home, right back into the difficult situations that compelled them to migrate in the first place. A Honduran boy from San Pedro Sula cries remembering her older brother, who was killed by gangs. During the “child migrant crisis” of this summer, Honduran president Juan Orlando Hernández dissolved the old government agency that dealt with childhood development INFAH, and replaced it with a new agency called DINAF. At the center for deported kids, they’ve gotten around to crossing out INFAH, but not yet to painting the new agency’s name on the wall. Yaeli Milla is a Honduran Red Cross volunteer at the border with Guatemala. On an average day, 6 buses with deportees from Mexico roll past the border. She provides assistance to those most in need. A family is reunited outside El Edén, in San Pedro Sula. Two boys in the family left in secret for the U.S., without even telling their mother. They were deported after two weeks on the road. The mother of the deported boys makes a call outside her home in the small city of La Lima.  She supports a family of six selling loose cigarettes and nips of liquor from her house. A street in one of the many hilly neighborhoods of Tegucigalpa, the capital of Honduras. Geese squawk outside the home of a taxi driver who was nearly murdered by gangs in Tegucigalpa. Since the botched shooting, he has been constantly on edge. A member of Honduras’ National Police adjusts his face mask. Police in Honduras often conceal their identities to avoid reprisals from gangs. At a police press conference, three recently arrested gang members are displayed in front of members of the press. They include a 15 year old boy and a 19 year old woman, arrested while collecting so-called “war taxes” from bus drivers. At the Headquarters of the National Anti-Extortion Force, an officer works in a new surveillance room. The Force intends to decrease extortion on certain bus routes, where a pilot program has installed security cameras. At a Tegucigalpa bus station, military personnel have been deployed in an attempt to keep passengers and bus drivers safe from gangs. Hands raised for an evangelical service held for members of the transportation industry. Religion is a powerful draw for many Hondurans, especially in an industry where it’s so easy to meet one’s end unexpectedly. Honduras is the most dangerous country in the world, with a murder rate of almost 1 in 1000 – nearly twice that of Venezuela, the country with the second-highest rate.

2 thoughts on “Gangs and Migration in Honduras through Pictures”