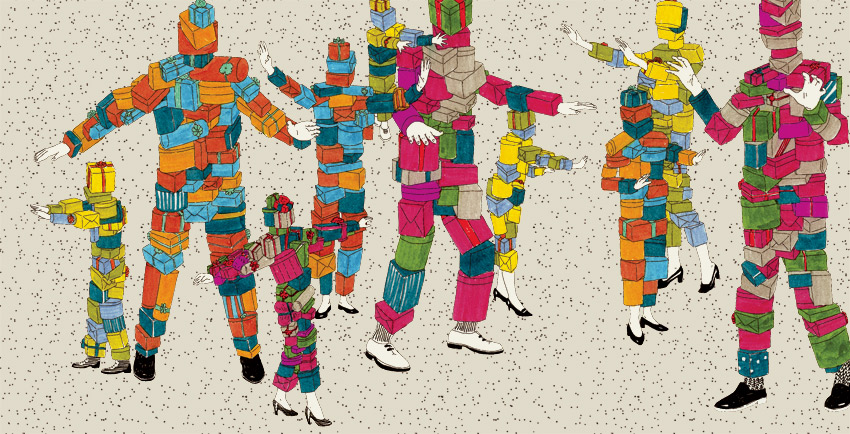 Here are some gift suggestions from our staff!

1. Our America: A Hispanic History of the United States by Felipe Fernández-Armesto “Our America: A Hispanic History of the United States” by Felipe Fernández-Armesto is an excellent intro to why you’ve been taught American history wrong your entire life. Spoiler alert: it didn’t start at Jamestown or Plymouth Rock. – Producer, Marlon Bishop Good, important and relevant here if you want a good read about race and power. – Music Consultant, Nadia Reiman

3. A Cup of Water Under My Bed: A Memoir by  Daisy Hernandez I recently interviewed Daisy Hernandez about her memoir A Cup of Water Under my Bed. I loved prepping for the interview because she brought up so many complex and personal issues: debt, journalism, sexuality, religion and more. It’s a great read! – Associate Producer, Antonia Cereijido

4. The Unbearable Lightness of Being by Milan Kundera 5. We Need New Names: A Novel by NoViolet Bulawayo I loved reading NoViolet Bulawayo’s “We Need New Names.” It’s the story of a Zimbabwean girl who comes to the U.S., and I wish it were a hundred pages longer. I also read a lot about North Korea, and have learned a lot from Jang Jin Sung’s “Dear Leader, Barbara Demick’s “Nothing To Envy,” and Suki Kim’s “Without You, There Is No Us.” – Senior Producer, A.C. Valdez Star Wars-meets-Romeo and Juliet in Brian K. Vaughan’s sci-fi romance about an interspecies/interracial couple’s struggle to raise their daughter while their respective worlds are at war. Great for nerds with taste. – Associate Producer & Engineer, Michael Simon Johnson The last one I’m reading. Little every day stories by the turkish writer Sait Faik Abasiyanik. The book is called “A useless Man” and is published by Archipelago books. – Intern, Laura Calçada

My family is Argentinean and there is some fantastic Argentine cinema. Two of my favorite movies are Nueve Reinas and El Hombre de al Lado. Nueve Reinas was directed by the late great Fabian Bielisnky and is perfect for any fans of thrillers like Oceans 11. El Hombre de al Lado is set in the only Le Corbusier designed house in South America and touches on issues of class and privacy – it sort of reminds me of an Edward Albee play. – Associate Producer, Antonia Cereijido

If you’re into horror movies, like I am, you should go see “The Babadook.” What comes off as a monster movie is actually a metaphor for the internal battles of parenting and loving someone who drives you crazy sometimes. – Senior Producer, A.C. Valdez

Anthology film channelling the spirit of Tarantino, the bleak humor of the Coen Brothers and the fury of Liam Neeson. Six short stories strung together by theme alone, as various people are pushed to the edge of their sanity. Brash, bloody, hilarious and surprisingly poignant, but certainly not for the faint of heart. – Associate Producer & Engineer, Michael Simon Johnson

The self-titeld debut EP by Puerto Rican duo Buscabulla is one of my favorite records of the year. Tropical indie electro soul vibes. Singer Raquel Berrios is an artist and designer as well, so all the art surrounding their project is pitch perfect. – Producer, Marlon Bishop

I’m always listening to Pixies and Morphine (check out Morphine’s “The Night,” one of the sexiest albums I’ve ever listened to). But I also try to get to local music and in the past year I’ve discovered singer/songwriter Sam Kogon, the Talking-Heads-esque Stompcat, and I’m always staying tuned to hometown favorites like Heavy Breathing and the Daycare Swindlers. – Senior Producer, A.C. Valdez

1. A baby succulent planted just for you or a just bought yummy hot chocolate mix with its own mixer with Ecuadorian dark from a chocolatier in Cambridge – Executive Producer & Anchor, Maria Hinojosa I make a habit of wearing guayaberas (I have one on right now, actually) as a way of repping my roots. If you live in a warm climate or just have a really warm apartment in a cold climate, this is my shirt of choice, and they make a great, classy gift. – Senior Producer, A.C. Valdez

3. Amazing nail decals from everything from papel picado to Frida Kahlo from Cha Cha Covers. 4. One must not be without a Messi jersey.