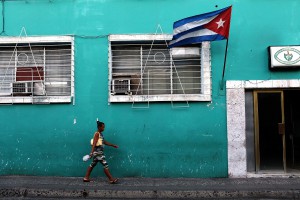 SANTIAGO DE CUBA, CUBA – MARCH 22: A woman walks under a Cuban flag on March 22, 2012 in Santiago de Cuba, Cuba. Fourteen years after Pope John Paul II visited Cuba, Pope Benedict is scheduled to arrive into the communist country on Monday the 26th. Benedict, who will be arriving from Mexico, will conduct a mass in the city of Santiago de Cuba first followed by a mass in Havana before leaving on the 28th. Tensions are high in Cuba between dissidents and the government as activists hope the international exposure of the Papal visit will result in renewed attention to their struggle for greater freedoms. (Photo by Spencer Platt/Getty Images)