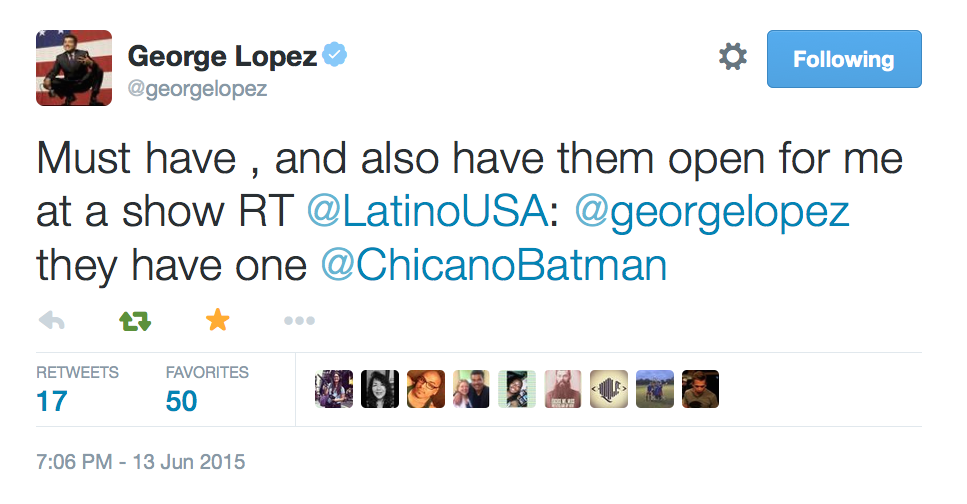 This week’s community response to our latest podcast, Who Tells the Story?, included one very cool Twitter moment between our show profile, the band Chicano Batman and comedian/actor George Lopez. It all happened after we featured the Southern California group during our “Sabiduría” segment to close the show.

Of course, we replied.

And so did Chicano Batman.

@georgelopez @LatinoUSA We got you George! Let us know how and we'll get one to you!

That exchange led to this offer from Lopez’s account:

Must have , and also have them open for me at a show RT @LatinoUSA: @georgelopez they have one @ChicanoBatman

Here’s hoping that a Chicano Batman/George Lopez show does indeed happen. If so, we want in! By the way, this isn’t the first time Lopez’s account has tweeted out to us. Earlier this year, Lopez liked what we did with Maria Hinojosa’s Immigration Mambo piece:

Also, did you know that Lopez made his first Latino USA appearance in 2003? Listen to his interview with Maria from 12 years ago.

On a more serious note, our listeners made sure to Facebook share our story about the hate crime death of Onesimo Marcelino López-Ramos in Jupiter, Florida. If you haven’t caught it yet, you can listen to it here:

Yesterday, Univision’s Primer Impacto interviewed López-Ramos’ family. In that Spanish-language report, the family spoke about the young man’s hard-working attitude and love for his siblings. Similar to our Latino USA report, the Univision report indicated that some undocumented immigrants in Jupiter had spoken about similar incidents, but were afraid to report them to police.

Finally, many of you have shown a deep interest in this week’s news out of the Dominican Republic:

Migrant Workers in Dominican Republic, Most of Them Haitian, Face Deportation http://t.co/vIUcplpEtd via @nytimes

After we tweeted that story out, our team posted a video of New York City Dominicans protesting in front of the Dominican consulate. That video has already gotten more than 100,000 views.

Last year, Latino USA was one of the first national outlets to cover the latest immigration crisis and tension between Dominicans, Dominicans of Haitian descent and Haitians. Here is that segment:

See you next week! Meanwhile if you have any show ideas, comments or feedback, feel free to tweet me @julito77 or the team @LatinoUSA.