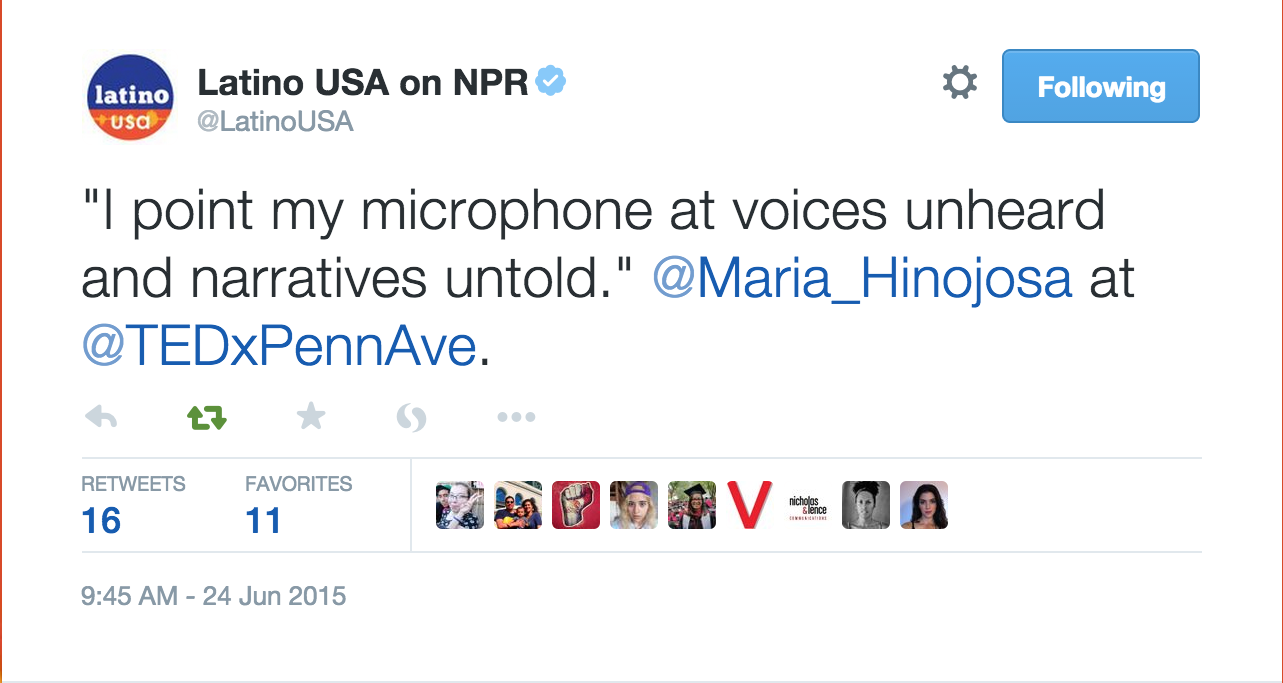 Earlier this morning, Maria Hinojosa gave a talk at the inaugural TEDx Pennsyvania Ave event in Washington, D.C. There was a livestream, so all of us here at Latino USA (and the rest of The Futuro Media Group) got to see Maria proudly represent the work she and the entire team do. In a few weeks (very likely after the July 4 break), the official video of her TEDx talk will be made public. Once our team gets access to that video, we will share it on this site, along with a final transcript of her talk. In the meantime, I did want to share some Twitter highlights from today’s talk, since some of these tweets do capture the spirit of Maria’s words and why she does what she does. By the way, apologies in advance for some of my own gushy tweets, but I can’t help it: they really do explain how I feel about this place and my boss (FYI, she would be the first person to tell me to call her “a colleague” and a “a friend).

Anyway, here’s what Twitter said (including tweets from some of us here at Futuro Media):

“I point my microphone at voices unheard and narratives untold.” @Maria_Hinojosa at @TEDxPennAve.

@Maria_Hinojosa: making invisible peple visible in the media & telling the stories of all people. #TEDxPennAve15

“We don’t approach this massive demographic change as something that needs to be feared.” @Maria_Hinojosa at @TEDxPennAve

@Maria_Hinojosa is raising her voice on TedX Penn Ave and redefining what is news. Thank you, Maria!

@Maria_Hinojosa Fantastic TedTalk Maria! Through you, America will understand the Latino lens on news!

.@Maria_Hinojosa brings up @TEDxPennAve the issue of why it’s important to tell the stories of immigration detention centers in news now.

“Who gets to tell the story matters.” Wisdom from NPR’s @Maria_Hinojosa #TEDxPennAve15

I don’t use the word minority or illegal to describe myself or others. @maria_hinojosa #TEDxPennAve15 ✊🏾

“I created my on newsroom, a team committed to diversity & tell our story” @Maria_Hinojosa #TEDxPennAve15 Watch live: http://t.co/kOV1gkLyXp

We can’t wait to see it either.