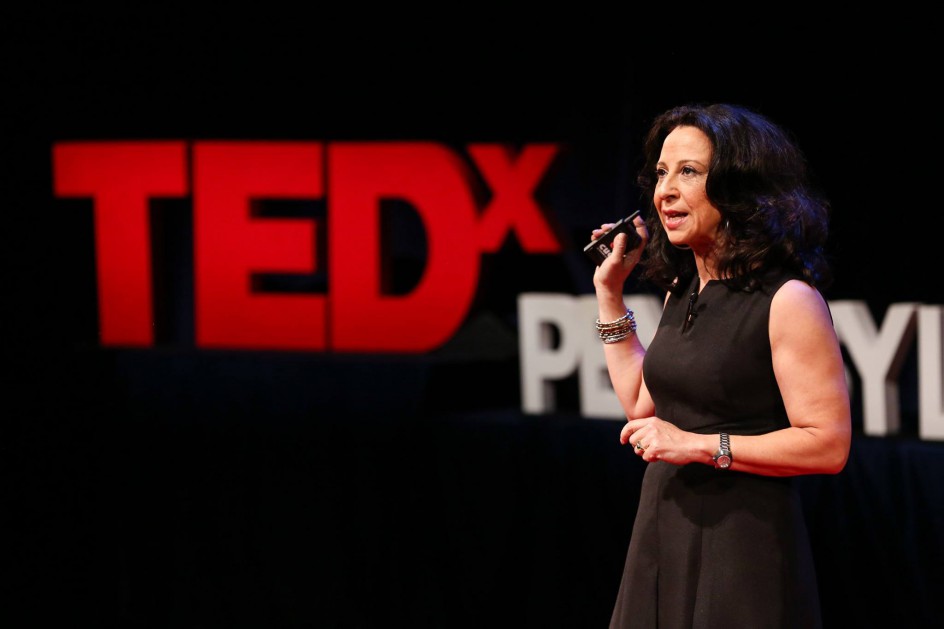 So as a little girl growing up in Chicago, on the South Side, the television was on all the time. The news was always on in our home. And the radio was on all the time, too. In fact, if you look really closely, you’ll see my brother Jorge, carrying a little toy radio complete with a little antenna. We were a Mexican immigrant family growing up in Chicago in the middle of the Civil Rights era. My dad was a medical doctor devoted to researching the inner ear, but he was a news junkie. He spoke English with a thick Mexican accent, but he watched Meet the Press every Sunday, he read TIME magazine religiously and watched The Today Show. As a little girl, I understood the importance of journalism, reporting and media. But I never saw myself there. My stories didn’t appear. We were invisible. I was invisible from the media narrative. No one in the reporting that I saw I saw looked like me, looked like my family. So I began to think that maybe somehow my life —my story— was less valuable, less important.

Then one day I saw Martin Luther King speaking. And it was this person who looked the most unlike me who made me believe that maybe one day, yes, I could be a part of the fabric of this country. I didn’t recognize this invisibility. I just lived it. I didn’t understand it. And I came to see myself and feel myself as “the other.”

Well, I moved to New York to go to college. And if you look really closely, that’s me trying to rock a Chicana punkish thing going on there. Great hair, huh? I formed a radio show at my university called Nueva canción y demás. And we were documenting what really was a renaissance of Latinos and Latin Americans in New York. Artists, intellectuals, political refugees from South America, from the Caribbean, were coming into New York City, and we were documenting that on my radio show. We would hang out in art galleries in SoHo until late and then we’d go to the Polish-Ukrainian restaurant that was open 24 hours—and we’d be gathering around a table speaking excitedly in Spanish about Nietzsche and Kant and existentialism. And the white bohemians would be looking at us like, “What are they yelling about? And could they just like be quiet?”

But I was living and experiencing stories that I wasn’t seeing anywhere on the media. And I began to believe that this life that I was leading in New York—this international, multiculti, truly diverse, Latin American, Latino and urban experience was really just an extension of the great American experience.

And I began to believe that I was seeing the earliest glimpses of The American Future.

I became a journalist. And, yeah, I was the first Latina in many newsrooms. So I felt like a fish out of water and I did not get the jokes.

But I would force myself to raise my hand at editorial meetings because I understood that this perspective that I had should be included in the media narrative. It wasn’t that what I was feeling or thinking was better or worse—it was just different and it needed to be included.

I chose to do stories where other reporters wouldn’t go. And I felt a responsibility to do that. Now in his book News For All The People: The Epic Story of Race and the American Media, Juan González writes about what happened when black journalists were covering lynchings in our country. But in white newsrooms, lynchings —this mob violence— wasn’t even considered news. In fact, the black journalists were called “un-American” and were told they were biased.

But were they biased or were they simply speaking the truth?

Who got to decide that? That it wasn’t news?

Who was in those newsrooms?

During World War II, innocent Americans were imprisoned. They were Japanese Americans. There may not have been bars in the prison but they were in prison, and yet in newsrooms it was decided that this would be called an “internment.” Who made that decision so that it would be more palatable for the rest of us?

So what did I do? I formed my own newsroom. So on my radio show Latino USA on NPR and on our television series America By the Numbers on PBS, we don’t approach this massive demographic change that we’re experiencing like something that needs to be feared—like, oh my God, what’s happening? No, we look at it as something that needs to be acknowledged and that needs to be reported on critically through lenses of power, race, inequality, immigration… and we believe that the reporting we do, this visibility that we give, is helping people navigate an America that is becoming increasingly complex and increasingly diverse.

And in our newsroom we do things a little differently because we can.

So is that a bias, or are we removing one and simply telling the truth? But when we went there, the city council was all white. So the new citizens were invisible. We were there to do reporting about what these new citizens feel about participating in American politics —voting, the Constitution— and we talked animatedly about this. Because that was my path, too: from immigrant to citizen. And yet only one former refugee served on city council. So they were essentially invisible from the political power structure.

But when we went back two years later, something extraordinary had happened. For the first time ever, in one year, three former refugees had decided to run for office in the City Council. And they told us that in part what happened was that they saw themselves on the big screen of public television, talking about their American experience —talking about participating, talking about the Constitution— no one had ever shown them this narrative of their American lives and they saw it on television, and they became inspired by themselves. They believed what they were saying. They believed their own power, and then decided to become visible in their own government. We documented the first-ever Bhutanese American to ever run for anything in the United States of America. Who knows, his son who is an American citizen, may be President. It’s possible.

So you can imagine that for me as a journalist, when I found this news, it was incredible. The fact that we had helped to inspire democracy? I mean, that’s amazing.

And the thought that I was able to share this, with the new citizens of Clarkston and help them go from invisible to visible, was an amazing moment in my life as a journalist.

So, who gets to tell the story matters.

We look back now in our country —oftentimes in horror— and we think, “Massacring the Native American people? Lynching innocent African Americans? Imprisoning innocent Japanese Americans? Treating Civil Rights protesters like they were animals?” And so I wonder whether or not, we’ll think back, look back to this day and people will say, “They were holding women, children, toddlers and babies in detention because of their immigration status? They were doing that then?”

And who was telling those stories?

Or why weren’t those stories being told?

Who was in those newsrooms?

Well, we know that at Futuro Media we are telling those stories and making them visible.

I’m also a professor and so I tell my students, who are the descendants of immigrants or are immigrants themselves, that they should now see themselves as if they are the new pilgrims —the new pioneers— and that this is the way that they’ll be written about in the history books. Not like the descendants of some illegal people. And we all want them to feel visible and included in this country —and not like “the other”— because they are our future. We know that by the numbers.

So when I think back to that little girl feeling invisible, searching for signs of life (you know, when you had to turn the channels like this or turn the radio dial like this, I know all young people are going to be like, “what? we’re going to figure that out”), I was doing that all the time—looking for signs of life that looked like me in American journalism. And it wasn’t a good feeling. Unseen. Unheard.

And so I spoke up.

And in the face of an America that was —frankly— perfectly content with me remaining invisible, I spoke up even louder.

And now I point my microphone at voices unheard and narratives untold, and together we tell the stories of the new America that’s visible.

2 thoughts on “From Invisible to Visible”