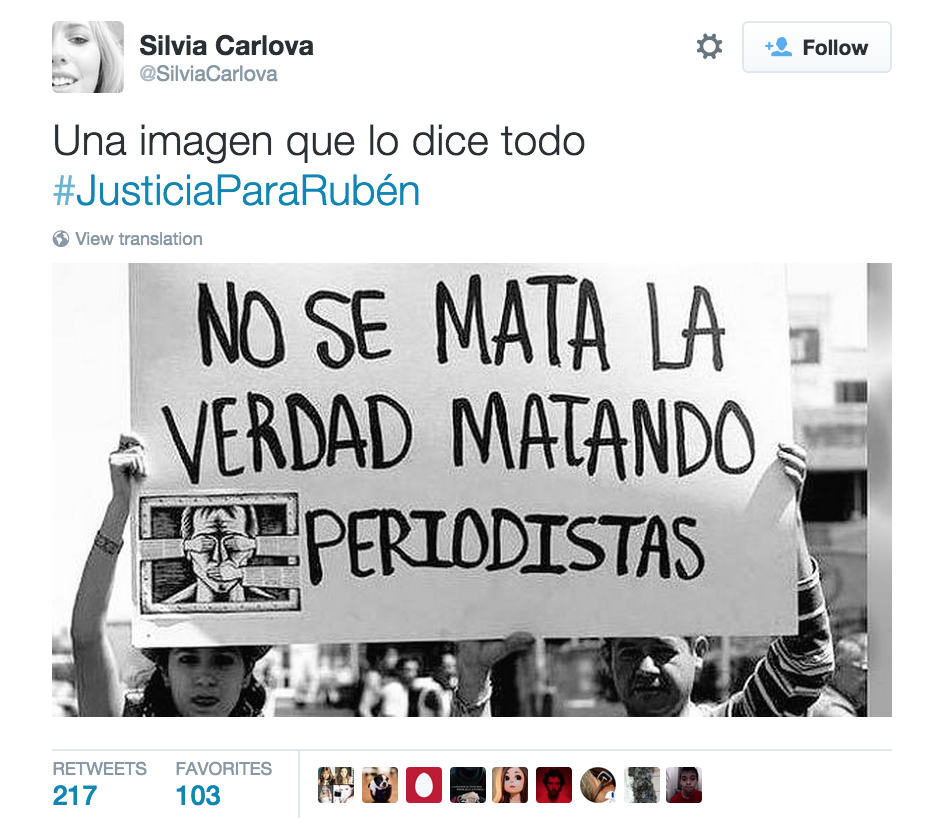 Yesterday afternoon in Mexico City, Mexican photojournalist Rubén Espinosa was confirmed dead, the victim of two gunshot wounds, according to reports. Espinosa’s death was one of five deaths: reports indicated that three women who were in the same apartment as Espinosa also died, while the fourth woman who died was a domestic worker. Reports also said that Espinosa had fled his home state of Veracruz, and that he was considered missing, according to groups who push for greater free speech in Mexico.

Today, the Committee to Protect Journalists Américas tweeted that at least 11 journalists have been murdered in Veracruz since 2011, with three others gone missing. In addition, the main Committee to Protect Journalists site has a list of 80 journalists and media workers who have been killed in Mexico (34 of the 80 killed with “a motive confirmed”) since 1992. Espinosa would be 81, if his name were to be added to the CPJ list. Earlier this year, according to the BBC, “the National Commission on Human Rights said 97 journalists had been killed in Mexico in connection with their work since 2010.”

News of Espinosa’s death has led to #JusticiaParaRubén (#JusticeForRuben), a hashtag that is quickly trending on Twitter in Mexico City and Mexico this afternoon.

Here are just some of the tweets that people have shared in the past few hours:

One image says it all: You don’t kill the truth by killing journalists.

Journalists from #Oaxaca demand #JusticeNow #JusticeForRuben, a Veracruz correspondent who has been murdered #Enough

Rest in Peace, #RubenEspinosa #JusticeForRuben #Edomex #Veracruz: Ruben Espinosa, another journalist murdered for investigating corruption in the state of Veracruz

They truly are no words #JusticeForRuben

Solidarity for the four women and Rubén #JusticeForRuben

This video shows photographers from the state of Jalisco:

Some people are tweeting about a protest scheduled for later this afternoon in the Mexican capital:

That his cowardly murder does not go unpunished. Gather at El Ángel at 4pm: Not one more dead journalist! No more murdered youth!

This evening, tweets of the protest began to appear on Twitter.

A sad and moving day in Mexico City as people march in protest at another murdered journalist #JusticiaParaRuben pic.twitter.com/etAdxDmJsC