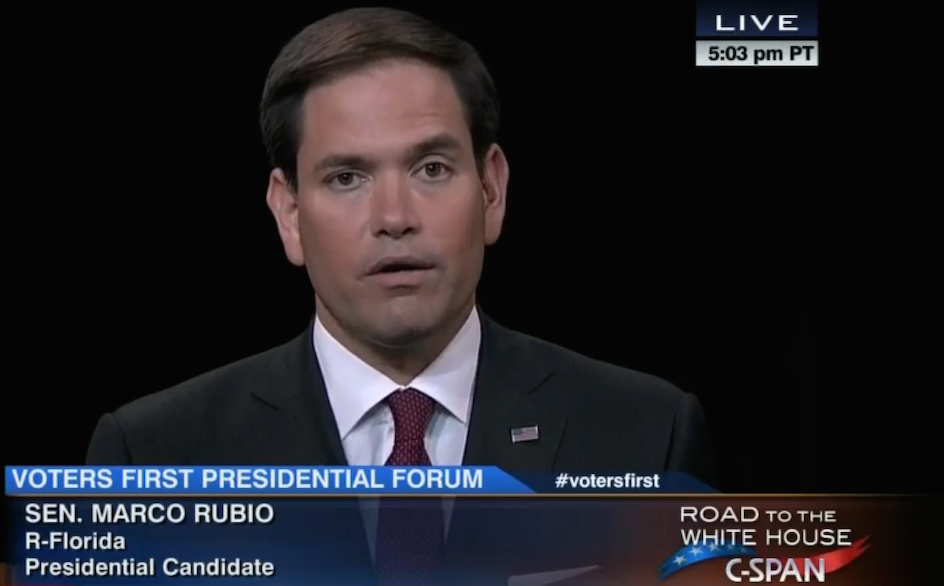 Last night during the New Hampshire 2016 Republican Candidates “Voters First Forum,” Florida senator and Republican presidential candidate Marco Rubio was asked about immigration. Here is a clip of what he said via C-SPAN:

Breitbart posted a full transcript of Rubio’s response. What follows is an excerpt of Rubio’s initial comments:

“[Immigration] cannot be fixed in one massive comprehensive piece of legislation. There is only one way forward, and it will require three steps, and they have to happen in the following sequence. First, we have to prove to the American people that illegal immigration is under control. It’s not good enough to just say, ‘We’re going to pass a law that will bring it under control.’ People demand to see it. They want to see the fence. They want to see more border agents. They want to see more drones and cameras and ground sensors. But they also recognize that over 40% of the people in this country illegally entered legally, and overstayed a visa. And that’s why we need an electronic verification system that employers must comply with, or they will be heavily fined. And that’s why we need an entry/exit biometric system at our seaports and airports. So that we know when people are overstaying visas and we can identify them. That is the key that unlocks the ability to make progress on anything else when it comes to immigration.”

Although Rubio was one of the senators who pushed for a bipartisan Gang of Eight comprehensive immigration reform bill which passed the Senate in the summer of 2013, he also kept asking that more changes be made to the bill before a formal vote. For example, in the spring of 2013, Rubio issued a statement about the bill. In that statement, he said this:

We have made substantial progress, and I believe we will be able to agree on a legislative proposal that modernizes our legal immigration system, improves border security and enforcement and allows those here illegally to earn the chance to one day apply for permanent residency contingent upon certain triggers being met. However, that legislation will only be a starting point.

Has Rubio (who has seen his poll numbers slipping) changed his views on immigration reform from the days of the Gang of Eight or are his words from New Hampshire last night a refinement of what he was saying in 2013?

Latino USA reached out twice to the Rubio campaign to see if it could elaborate on the senator’s most recent comments, but as of this posting, the campaign has not responded. (If the campaign does respond, we will share any updates.) “I think it’s good for the Latino community to have one of their own, as a top-tier candidate, bringing pragmatic ideas. Much of what he has expressed and his narrative, is one that is common to us. Senator Rubio spoke out on the issue of immigration, and showed leadership, even when it was unpopular for those in his own party.  And while the passage of the Senate bill was a step in the right direction, many understood the bill was not perfect and that improvements were needed.

While Senator Rubio has expressed mistrust over the Administration’s ability to honor the legislation as passed, he has also made his sentiments clear—the need for reform has not diminished. Regrettably, when House leadership began to advance ideals, with the release of their principles, they were met with threats and eventual Administration action by the President, which ended the debate in Congress.  It was an outcome many predicted.  Congress must act to provide the legal avenues necessary to absorb the current undocumented population, accommodate for future immigrant flows, and address the issues on the border. Each part is essential.”

Nonetheless, Democrats are using Rubio’s New Hampshire comments to claim that Rubio has always been out of touch with U.S. Latino voters, even though the Florida senator is of Cuban descent. Pablo Manriquez, the Democatic National Committee’s Hispanic Media Director, told Latino USA the following: “Last night in New Hampshire, Marco Rubio proved just how far he’s run from the reform bill he once supported by giving a lengthy response to an immigration question in which he used the word ‘citizenship’ exactly zero times. Before that he called for ‘less Sotomayors’ on the Supreme Court. Sadly, Marco Rubio’s 21st Century agenda is a comprehensive push backwards on everything from marriage equality, on the Affordable Care Act, on women’s rights, and more. Latino voters deserve better.”

Writer and political observer Adriana Maestas indicated to Latino USA that Rubio has indeed moved away from his initial Gang of Eight efforts: “Marco Rubio is trying to distance himself from the work that he did with the Gang of Eight comprehensive immigration reform bill that he voted for in 2013 and that did have a path to citizenship, albeit a long and arduous road. Rubio is essentially pandering to the Donald Trump wing of his party asking for more border agents, drones and ground sensors at a time when the border is already heavily monitored.

The Border Patrol is already the largest law enforcement agency in the country and has been plagued with criticisms of misconduct. Instead of asking for accountability and showing fiscal  restraint, Rubio’s rhetoric falls in line with the priorities of his donors in the private prison industry.”

Immigrant reform advocate Frank Sharry of America’s Voice has followed the immigration politics of Washington for years. When asked about what Rubio said last night, this is what Sharry said to Latino USA: Now he says we have to do the three elements in sequence, when he knows full well that such an approach would never, ever pass the Congress. The Republicans are too divided and the Democrats are too united. The only thing that can pass is comprehensive immigration reform —with all Democrats and some Republicans— but only if Republican leaders step up and lead rather than turn tail and run. Rubio was a champion of the cause. Now he’s a traitor to it.”

Stephen A. Nuño, associate professor in the Department of Politics and International Affairs at Northern Arizona University and a contributor at NBCNews-Latino, explained to Latino USA that Rubio “failed miserably” last night: “Marco Rubio failed miserably last night in his discussion on immigration. His message was the same throwback message of the GOP since the Prop 187 debate in California 25 years ago. The GOP lost that debate already. He’s essentially Donald Trump with good hair.”

What do you think of Rubio’s immigration position? Tweet me @julito77 with your thoughts or add your comments below.

4 thoughts on “Rubio Calls for Three Steps to Immigration Reform”