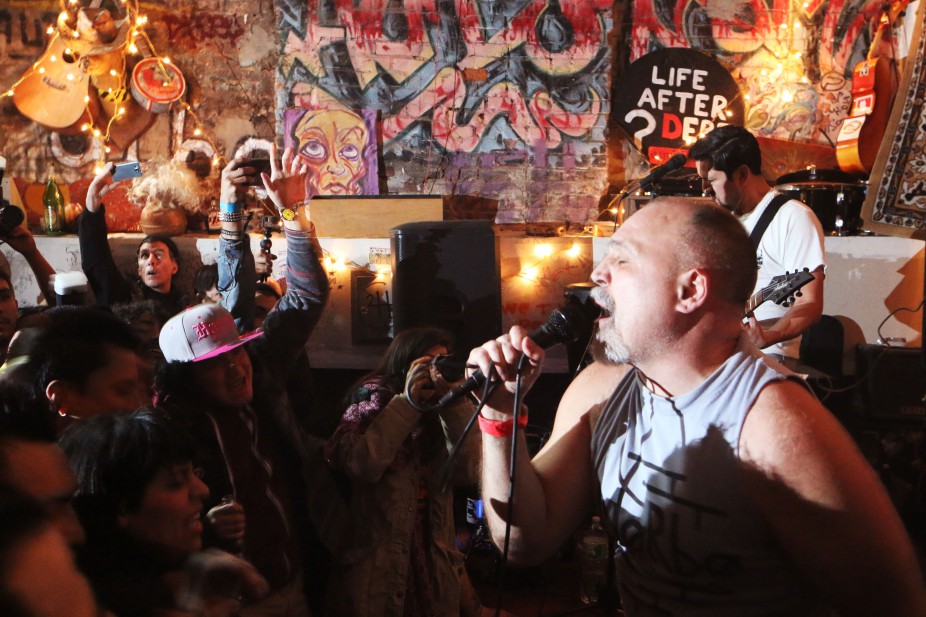 The best thing about Mondays here at Latino USA? Since we are a weekend show, we love coming back to the office to check out what people are saying about the newest podcast. This Monday is not that different, especially since our latest show, “Off Beat,” covered a topic that will always elicit many reactions: music. Not surprisingly, two segments have already gone viral. The first one, “Hardpop: Dancing Through the Drug War,” discusses a topic few know about: how an electronic dance club in Ciudad Juárez became one of the top clubs in the world.

The other segment, about hardcore’s iconic Los Crudos band, also went viral, mostly because the Facebook page of Maximum Rocknroll shared the segment:

It was very cool of Maximum Rocknroll to feature the piece and even cooler to see their post get over 1,500 Facebook likes and 215 shares in just 18 hours. The Maximum Rocknroll community knows their music, so to see a Latino USA segment on their Facebook page kind of made our day.

Until we starting reading some of the comments, which were objecting to the story’s original web headline—”Los Crudos, Hardcore’s First Latino Band:”

“Great article; but to say that Los Crudos is the first hardcore latino band; is a complete understatement, specially since the genre was basically founded for the most part by hispanic Americans (Agnostic Front anyone?) and a lot of the values you see in hardcore came from the most part from traditional latino family culture. Needless to say I do have to say that Los Crudos is one of the most important and influential hardcore bands from the 90’s. Latino or not, there’s always at least one person that recognizes my Los Crudos patch at any show I go to; mind you that I attend shows from several genres (from country/bluegrass to death and black metal shows to chiptune and raves) i always get at least one person saying “holy ****! I love that band!” but yeah ..not the first ones for sure, even though theres a huge chance that the first punk rock band was actually formed in South America and not in England like it was first let to believe. (google Los Saicos from Peru)”

Good point about Los Saicos, and although many might not think of them as a “hardcore” band, they are considered to be the punk pioneers of Latin America (and to some, the entire world). This song, “Demolición,” is from 1964. That is 51 years ago.

But are Los Saicos “Latino?” At least in my worldview (not the definitive authority, by the way), I have always used “Latin American” to describe Saicos and I get that identities are getting blurrier these days, but yes, bands like Los Saicos were doing amazing things way before Los Crudos broke through.

As for Agnostic Front, lead signer Roger Miret is of Cuban descent, but not every original member in the band was Latino. So calling Los Crudos the first all-Latino hardcore band is not that far off, although yes, the headline should have been more clearer.

“Obviously they’re not the first, but what they and huasipungo did was start the explicitly latinx-identified hardcore scene in the US. Although I think huasipungo predates them by a bit. Esneider Huasipungo? I don’t think any of the bands made a point to publicly make statements identifying as latino bands before them to make it sort of a sub-scene, like straight edge or queer punk. Los Crudos and huasipungo set the ball in motion to create a the Latinx-punk scene in the US that exists today. But yeah, calling them the first was a bad choice of words.”

The Huasipungo comment presented a more valid reason for us to change the original web headline and say, “Los Crudos: Hardcore’s Latino Pioneers.” As one blogger wrote about Huasipungo:

“Huasipungo is a political, Latino hardcore band that started in NYC in 1991. During the ’90s i think they were kinda overshadowed by the more popular Los Crudos (also Latino and extremely political), but to me they were every bit as good. I prefer Huasipungo actually, and think more people should be exposed to them.”

Other comments from Maximum Rocknroll weighed in on the debate. It got kind of intense (so many amazing bands were named), but it was all in good fun. Anyway, we heard you and we changed the headline in the original Crudos piece.

Thanks to all of you who listened to the segment, and if you ever need to connect with us about any part of the show, just tweet @LatinoUSA or me @julito77.

One thought on “When Music Debates Get All Crudo”