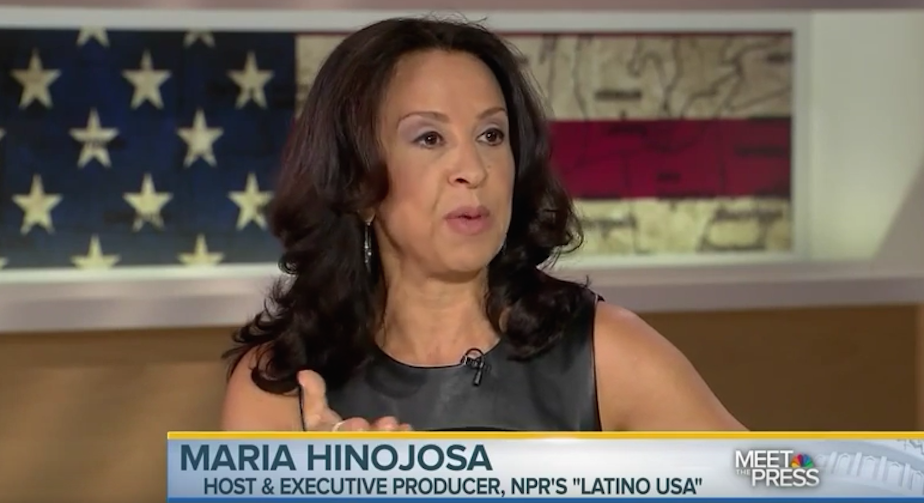 Yesterday morning, Maria Hinojosa made another appearance at the “Meet the Press” table (her fourth in 2015). This time, during the more lighthearted Endgame segment, MTP host Chuck Todd wanted Maria’s thoughts about a new commercial from Mexican television for the upcoming Mexico-USA soccer game. The promo from TV Azteca showed clips of Donald Trump lamenting a lost America, mashed up with images of El Tri’s national players.

As she offered her explanation about the promo, Maria responded with one very Mexican expression, “Le sale el tiro por la culata.” (Literally: “The bullet came out through the opposite side of the rifle.”) Or in other words, Trump’s June comments about Mexicans and his follow-ups have backfired on the Republican candidate. The Mexican expression (common in other parts of Latin America, too) even caused Todd to say, “¡Muerto!” (“Dead!”) as the show came to a conclusion.

It is safe to say that this was very likely the first time the words “Le sale el tiro por la culata” were ever spoken on MTP. Not surprisingly, some people on Twitter noticed:

Not everyone, however, was complimentary of the culata expression:

For all you Spanish language enthusiasts out there, the expression “se le sale el tiro por la culata” is not an exclusive Mexican expression. It is also commonly used in other Latin American countries and also in Spain.

What do you think of Maria’s “Meet the Press” appearance? Share your comments below.

One thought on “One Most Mexican Expression on MEET THE PRESS”